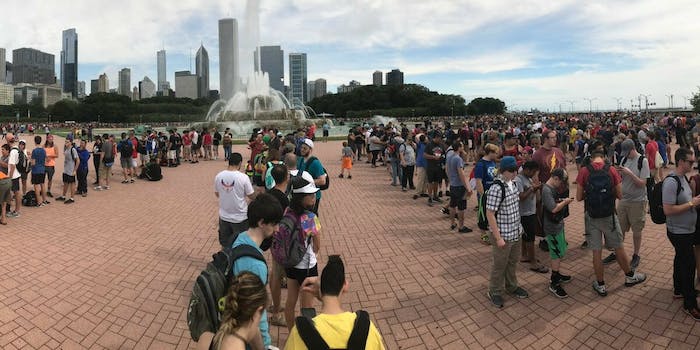 The lines to get in were also ludicrously long.

The Pokémon Go Fest in Chicago was supposed to be a day where you could catch every Pokémon you could find while hanging out with 20,000 of your closest friends in Grant Park. Unfortunately for everybody in attendance, connectivity issues plagued the festival, and as a result, Niantic had to issue refunds to all attendees.

With players plagued by long lines to get in to the event and WiFi problems throughout the park, the Pokémon Go experience was a disappointment for many.

“I maybe caught 20 Pokémon, and if I was at home, [I] would have caught over 200 plus,” Cat Harris, who flew in from Tucson, Arizona for the event, told CNN. “Overall I am disappointed. I felt it was very (unorganized) and needs a lot of improvement. I feel the location was not appropriate and made it difficult to play depending on your cellphone provider.”

It seems that many other attendees felt the same way.

Wrote a dispatcher from Tech Crunch:

First and most notably: the game simply didn’t work. Within minutes of the first attendees filing into Grant Park, the cell networks got shaky. Within 20 minutes of the doors officially opening, every network was down. I’ve done my fair share of liveblogs over the past decade, so I’m used to getting around network congestion and finding some semblance of signal. There was nothing.

If you could get online, Pokémon Go itself was having issues. Tapping a monster to catch it would result in nothing but an error screen—a particular punch in the gut to many a player who traveled far in hopes of completing their Pokedex, as the Park was set to spawn some of the game’s rarest monsters. You’d tap an Unown or a Heracross (usually only available in very specific regions, and certainly not in the middle of Chicago), and the game would crash.

The lines to get into the event also were ludicrously long.

The line for #firstcatchhour for #pokemongofest. #pokemongo #pokemon #fest

Along with the refunds with those who bought tickets to celebrate the one-year anniversary of the popular augmented reality game, Niantic also offered $100 worth of game currency.

“Today at Pokémon GO Fest in Chicago, technical issues created problems for a large number of players attending the event,” Niantic said in a statement released Saturday. “From everyone at Niantic, we apologize to all of the Trainers who came out to Pokémon GO Fest today. Although we were able to solve many of the technical issues, we were not able to offer every attendee a great experience … We appreciate the patience of all the Trainers who joined us in Chicago this weekend. We will strive to make sure our experiences are of the highest quality going forward.”