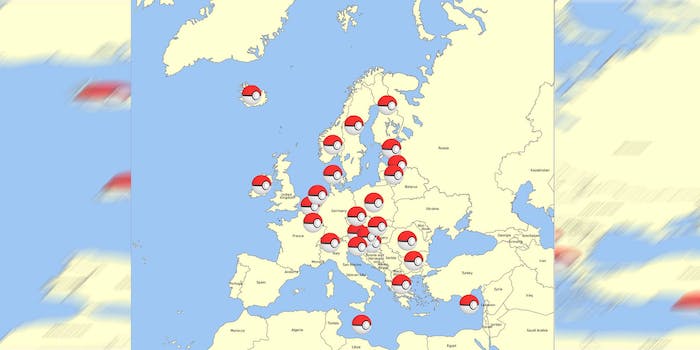 Pokémon Go is poised for world domination. Though the gym at the border of North and South Korea may be gone, developers Niantic have opened up its Pokédex to more people than ever thanks to sweeping rollouts in Europe.

Earlier this week, the game extended to Italy, Spain, and Portugal and, on Saturday, the Pokémon Go Facebook page announced that 26 more countries would join the ranks as aspiring Pokémon masters.

According to IGN France, the country was originally to be among the dozens of European nations now able to download Pokémon Go. Niantic has reportedly held off on making the game available in France due to recent circumstances, presumably related to the attack in Nice.

Pokémon Go began beta testing in the United States, New Zealand, and Australia in the spring, with an official launch date of July 6. Despite crashing servers and copious problems, Pokémon Go‘s popularity has swelled with no signs of stopping.

Germany and the United Kingdom next gained access to Pokémon Go without the risk of having their phones commandeered by malware. Some are still willing to take that risk. Others have even gone a step further. According to the Los Angeles Times, the Pokémon Go knockoff game City Spirit Go hit the Chinese app store just as Japanese citizens were signing up for beta testing for the real game.