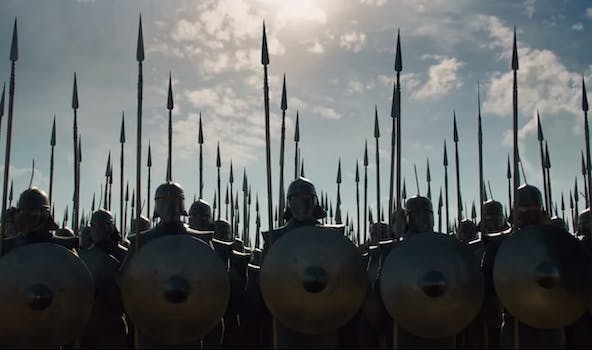 The Dothraki and Unsullied deserved better.

The latest episode of Game of Thrones brought fans the much-teased Battle of Winterfell, a grueling tour-de-force of what happens when you pit the living’s finest warriors against the Army of the Dead. While Arya ultimately saves the day with a buzzer-beating backstab, it’s not before thousands die maintaining the perimeter outside the gates—and none are sacrificed more heavily than the notably more melanin-rich, fresh-from-Essos shock troops.

In a harrowing opening salvo, the entire contingent of Dothraki, arakhs freshly lit by Melisandre’s fire magic, charge straight into the Army of the Dead. Their blazing swords shining across the battlefield are almost heartening until we see each pinprick of light snuffed out within moments.

THE WAY THE LIGHTS OF THE DOTHRAKI SLOWLY DISAPPEARED AT THE BEGINNING WHAT A TERRIFYING WAY TO START A BATTLE #GAMEOFTHRONES pic.twitter.com/pHNW3e1Shy

It’s an abrupt and shockingly thorough end for Daenerys’ day-ones, the people she spent years earning the loyalty of and whose arrival in Westeros has been hyped since the beginning. It took six seasons to marshal the resources to get the Dothraki host across the Narrow Sea, just to have them wiped out in about as many minutes.

Also…like…Dothraki really just got snuffed out with no fanfare. Are we gonna talk about that? No support, no nothing. Charge and we'll hurl flaming spitballs from afar.#GOT#GameofThrones#DemThrones

The carnage doesn’t stop there. The next line of defense is the Unsullied, the former slave-soldiers upon whose legendary phalanxes we see a literal wave of wights crash to devastating effect. They hold the line, as they are famed to do, but with precious few survivors—most notably Grey Worm. We later see many of the remaining Unsullied sacrifice themselves to protect the rest of the forces’ retreat behind the fire-moat, which really probably should have been their first line of defense.

The viewer reception was rightfully aggrieved, as many wondered why the foreign-born forces bore the brunt of the onslaught in a war that has always primarily been Westeros’ to fight, for a group of people actively distrustful of their arrival.

Can we just take a moment to talk about how Dany’s Brown Coalition was placed at the front of the formation? The expectation for them to not only die first but then hold the line for the northern wypipo to retreat was fucked up given the fact that they are the “outsiders”. pic.twitter.com/vyCs6QC9ub

Please know I noticed that all the brown and black soldiers died first (Dothraki and Unsullied). Lesson? Don't march North to fight in wight wars under any circumstance.

Did they…really…just…kill off almost all of the POCish people in the front lines of this battle, then turn them into zombies, then kill them all over again #GoT

Fans also questioned the tactical logic of even approaching a head-to-head with the living dead this way, with legendary fighters like the Dothraki and Unsullied effectively being thrown into a meat grinder because of the Northerners’ ill-advised battle plan.

Sending out the cavalry to die before you even employ ranged defenses I just— #GameOfThrones pic.twitter.com/TN8yjuI3CK

In an episode that featured so many other iconic character arcs, the quick elimination of the largest groups of brown people in a show that has struggled with non-white representation feels like a massive missed opportunity. The Dothraki and Unsullied are the beating, bloody heart of Daenerys’ journey to the throne and presented a complex issue in her conqueror’s narrative as she prepared to retake her homeland with backup gathered largely overseas. Giving them such an unceremonious exit suggests these people and their seasons-long storylines are utterly disposable to the larger, whiter story. It seems we’ll now never get a chance to see how these hard-won allies could have changed the face of Westeros—but at least there’s still hope for Grey Worm and Missandei making it to the beach.