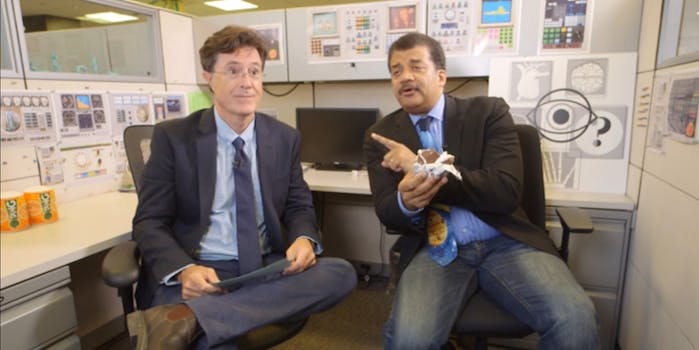 The New Horizons mission is the perfect opportunity for the Colbert-and-Tyson show to return.

No space-related news story is complete unless astrophysicist Neil deGrasse Tyson has weighed in, and this time Stephen Colbert got the definitive interview.

Tyson and Colbert met up at the offices of The Late Show, which Colbert will soon begin hosting, to discuss Tuesday’s historic flyby of Pluto by NASA‘s New Horizons probe. This is a particularly significant moment for Tyson, because he was one of the most vocal supporters of the international scientific community’s decision to downgrade Pluto to a “dwarf planet.”

“It looks like a planet, it’s got atmosphere, it even has a heart—unlike you,” argued Colbert, referring to the heart-shaped mark on new images of Pluto.

But Tyson would not budge. The New Horizons mission is an exciting achievement for space exploration, he said, but that doesn’t make Pluto a full-fledged planet.

Yes, you heard right. Tyson would downgrade Earth to dwarf-planet status before allowing Pluto to join the planet club again.