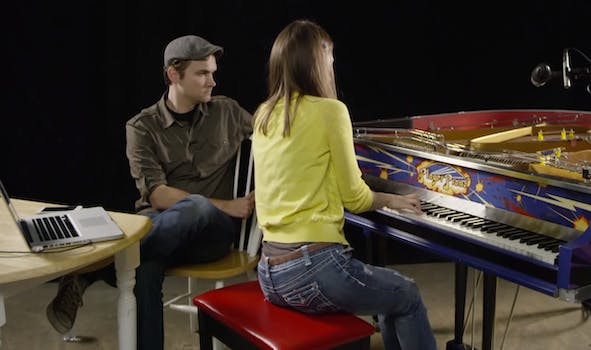 Improvisational musician Player Piano is at it again, and this time she’s breathing new life into some of the world’s most popular video games.

If you’ve seen the YouTube channel’s series of  “On the Spot” videos, where pianist and composer Sonya Belousova comes up with original arrangements for songs moments after she listens to them, then you know what she and her partner, producer and director Tom Grey, are capable of. They’ve tackled Nintendo theme songs that made us nostalgic and classic Disney themes that made us want to sing along—all while leaving us stunned at Belousova’s talent.

Now the duo has released an “On the Spot” compilation that return us to the world of gaming with a quality level worthy of a final boss battle. Belousova tackles five well-known video-game theme songs at the suggestion of an Indiegogo campaign supporter: Halo, Chrono Cross, Skyrim, Final Fantasy VII, and BioShock.

Belousova has never heard (or at least never attempted to play) most of these songs before, but the remixes she creates seconds after listening to the original songs will give you goosebumps.

Belousova and Grey hope that if they make their Indiegogo campaign goal, they will be able to create videos featuring some of these songs in full. The longer, more elaborate videos would require more money than they have at the moment. For example, Grey describes recording the Skyrim theme on a mountaintop with a choir of sword-wielding men—an epic idea that would certainly carry an epic price tag.