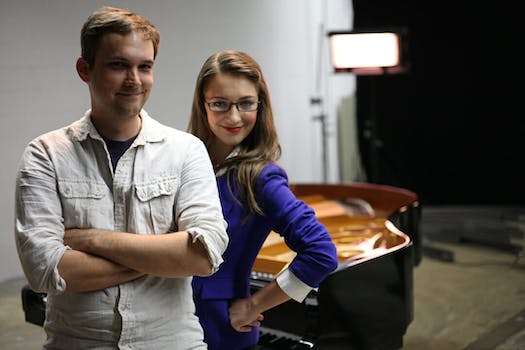 Behind the music of Player Piano, YouTube’s geek anthem remixer

What if John Williams were composing in the 19th century or Beethoven and Brahms had been commissioned to write for Nintendo?

These are the kinds of questions that Player Piano‘s stunning original arrangements on YouTube have conjured over the years. From various game melodies to the theme from Doctor Who, these classical remixes from pianist and composer Sonya Belousova allow us to revisit our favorite pop culture anthems as if they were born in a grand concert hall.

Belousova brings a unique and impressive spin to each of the songs she tackles using her impresario skills, as captured dramatically by filmmaker Tom Grey. Tuesday the musical duo kicked the drama up a notch with their newest release, an arrangement of Williams’ classic Superman theme which features Belousova playing piano while cosplaying as Lois Lane. It’s a beautiful take on Williams’ theme song.

Even by the high standards of YouTube talent, Belousova and Grey go out of their way to add flair to their performances, like throwing in Lois Lane cosplay or building an actual Nintendo console piano for their performance of a medley of Super Mario Bros. themes. We spoke with the talented duo over email to learn more about what drives them to perform Player Piano, their new Superman video—and how Belousova learned to play her first performances in just three days!

How did Player Piano start and why was it something you both wanted to create?

Sonya Belousova: When I first met Tom I absolutely loved the idea of the project and I knew I definitely wanted to be involved in it. It sounded very creative, and what I especially loved about it was that it fully involved both sides of me being a composer and pianist.

“John Williams’ harmonic language is so rich, his orchestration is intricate and exciting.”

What I loved about Player Piano is that it presented a great opportunity to create something unique and different for each video. However, at that time I was busy writing my ballet Orchis, commissioned by the Festival Ballet Providence, and then had to fly to Boston for its rehearsals and premiere (which by the way was phenomenal!).

So at first I thought it wasn’t going to work out since Tom was on a tight schedule and wanted to have a few arrangements ready in a very short period of time. But as I really wanted to be a part of this music awesomeness, somehow I managed to complete the first couple of arrangements in a record time—three days to compose and learn three virtuosic arrangements! Then the studio time right away! I remember I didn’t have much sleep those days…

Tom Grey: Player Piano was born mostly from my terrible piano playing abilities. Seriously, I’ve dabbled with playing all my life but I’ve never allowed myself to commit to it fully. Naturally, when YouTube came around and all these amateur covers of popular songs and soundtrack themes starting springing up, I totally wanted to be a part of it somehow. What I might lack in musicianship, I make up in video directing and producing, so it was just a matter of finding the right talent. The first time I heard Sonya play (it was an arrangement of [the theme from] Spider-Man), I knew she was special. I also knew that she was no amateur, and that as such it pushed me to another level creatively and production-wise. It’s constantly a challenge to come up with something visually that can match what Sonya does musically. That’s the reason I love this project.

What made you choose the Superman theme for this video?

Belousova: How can we not do Superman? As we all know I’m a superwoman!

We always like reaching out to new audience[s] as we don’t like being tied to any particular genre. So when we first started talking about arranging an iconic film score, Superman just came up naturally. Some of my most favorite film composers are Bernard Herrmann, Jerry Goldsmith and, of course, John Williams. To create an arrangement of Superman appealed to me in particular as it presented a musical challenge. John Williams’ harmonic language is so rich, his orchestration is intricate and exciting. So to translate his music into a solo piano arrangement always presents a challenge, and I was definitely excited by it.

Grey: Mostly, we just like the theme. I grew up in the Christopher Reeves Superman era so this theme brings back so many childhood memories. We also wanted to fit in some iconic film themes in there as we’ve done quite a few videogame and television themes at this point. As Sonya mentioned, it’s good to keep expanding the types of songs we do and not be tied to any one genre.

After you choose a theme, how long does the process usually take from that initial idea to completing a video? Can you briefly tell us what the process is like?

Grey: Usually, after we choose a theme, Sonya and I will talk about possible video concepts, and that will affect the type of arrangement she puts together. For example, is it a piano solo video? Will we want to bring in additional instruments, multiple locations, costume elements, etc? And of course all of those choices will ultimately affect how long it will take to complete a video. The piano solo videos we can usually put together fairly quickly and generally I like to block shoot two videos at once (for example Tetris and Street Fighter were shot on the same day as was Superman and the upcoming Batman). This helps keep my costs manageable. Something like Game of Thrones which has several locations, or Doctor Who where every shot is a VFX shot will take more time. But generally I can put a video together from start to finish in about a month.

Belousova:  It really depends on a few factors. Most of the arrangements I write for Player Piano are technically challenging and therefore require some time to both write and learn them. Moreover, I like reimagining the concept of the original composition. I never write a note-by-note transcription since simply covering someone else’s work doesn’t particularly appeal to me as a composer nor it carries any creative idea behind it. So ultimately it comes down to how busy I am at the moment and how complex and virtuosic the arrangement requires to be. Writing an arrangement itself could take me anywhere from two days to maybe two weeks. Then we go to the studio to record the music. We usually record several arrangements in one session. I love recording at the Firehouse Recording Studios as their 7’4’’ Bösendorfer has a unique and rich sound that translates perfectly into a recording. After the recording the session goes to the mix engineer who mixes and masters the tracks. While he’s working on the mix we usually shoot the music video to an unmixed track. Once the final track is delivered we substitute it in post.

Why did you want to cosplay as Lois Lane in the video?

Grey: Sonya and I tossed around a few ideas when approaching Superman. We were thinking about dressing Sonya as Supergirl and one concept had her playing in the Fortress of Solitude, but ultimately we decided to have this video be a bit simpler conceptual-wise and concentrated on Sonya’s killer arrangement. I felt that Lois Lane is so integral to the Superman story and was cosplay enough to nod at the series, without going overboard and scaring people off with too much theatrics. Also, this is an independent channel and we don’t exactly have massive budgets so we have to be selective which videos we want to go big on. And with Star Wars coming…well…

Belousova: Dressing up as Supergirl would have been too obvious of a choice, so I liked Tom’s idea of me wearing Lois Lane’s costume.

Themes from Star Wars, Batman, and Duck Tales are just a few of the fan favorites the duo has planned.

Your videos have received a good deal of media coverage and thousands of views. How have you seen your YouTube channel grow since you started and have been surprised at all by the attention?

Grey: It’s been an amazing process so far. We started with zero subscribers a year ago and just passed 100K on our tenth video. I think the best part of all this is the wonderful people we’ve met along the way. We did a crowdfund late last year to really get the channel going, and it was awesome to see complete strangers reaching out to us not only to just help us fund the channel but people who really became invested in what we were doing. And we’ve certainly been blessed with some good media coverage. Now that YouTube is 10 years old and large channels have been long established, it’s incredibly difficult to get a brand new independent channel noticed. I am incredibly grateful for the attention we’ve received.

Belousova: Agreed. It’s been an amazing journey so far and I’m excited for what’s coming next! When we started Player Piano I had no idea what I was signing up for and it’s been a crazy ride! As Tom mentioned, it’s very difficult at the present time to launch an independent music channel, however despite all the challenges we had to overcome, I didn’t have any doubts the project would be successful as it involves a collaboration of a professional composer/pianist and director/producer who are both completely dedicated to their craft. Our fans have been incredibly supportive since the very beginning, and having such a strong fanbase always pushes you to reach new horizons.

Can you tell us or tease what themes you might cover next? Are there any themes you don’t have plans for yet but would be your dream songs to cover at some point?

Grey: We have a Batman video, DuckTales “Moon Theme,” and “I Am The Doctor” from Doctor Who that will be coming out soon. Our next video after Superman will be our long lost “Happy” video. That was actually one of the first videos we shot, but one thing led to another and we’ve yet to release it. OK, I’ll admit it’s my fault on that one (Sonya please don’t kill me!) That being said, we have some great plans. Star Wars was recently discussed, and of course we have our epic Zelda video(s) that are giant productions which will take a bit of time. I’m personally looking forward to hearing Sonya’s arrangements of more popular music (non-soundtracks) and original compositions.

Belousova: Finally he admitted his fault about “Happy”! It’s not always a linear progression in which we record the music and release the videos. There’s been a lot of solo piano arrangements, which I love, but somehow the more complex ones are still on the way. Both “Happy” and “I Am The Doctor” are much more involved orchestration wise, both were finished a while ago, so I’m very much looking forward to releasing them soon. I’m working on Star Wars right now and having a lot of fun with it, it’s definitely going to be something very special. I write a lot of film scores but I haven’t had much time yet to write a lot of original tracks for Player Piano, so that’s definitely on our to-do-very-very-soon list.