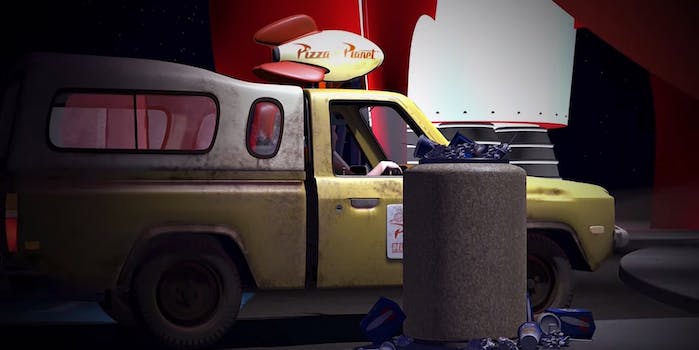 Did you notice these Easter eggs in your favorite Pixar films?

Much has been made of the whimsical self-references Pixar has put in its many films over the years—everything from toys referencing characters from other films to the ubiquitous Pizza Planet delivery truck made famous in the first Toy Story.

Like Studio Ghibli, Pixar loves dropping these subtle visual treasures into its films. Unlike Ghibli, however, which recently yanked a wonderful compilation of its Easter eggs from YouTube, Pixar and Disney have unexpectedly released an official compilation of their own. The supercut includes plenty of well-known references, and plenty you may have missed:

Disney apparently considers the familiar Pizza Planet truck, which has shown up briefly in every Pixar movie since Toy Story, to be so ubiquitous its travels aren’t worth recounting in this short edit.

Still, it’s nice to see Disney, long known for relentlessly sending DMCA takedowns to other people’s remixes of its content, playfully getting into the spirit with its own.