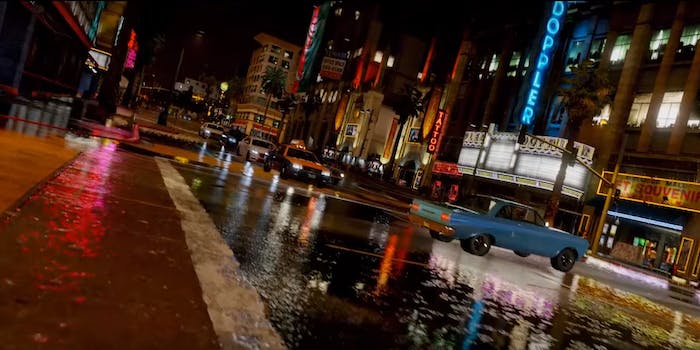 Both graphics and gameplay are enhanced by The Pinnacle of V mod.

You can now enjoy an enhanced version of Grand Theft Auto V on PC that won’t slow the game down to an unplayable crawl.

Toddyhancer, the best-looking GTA V mod to date, can slow the game down to a crawling 15 frames per second. The Pinnacle of V mod on the other hand, while it may not be as photorealistic as Toddyhancer, does make GTA V look much better, and also includes a bevy of gameplay improvements.

The sum total of the changes introduced by The Pinnacle of V mod will make the game adhere more closely to real-world physics, and thus make GTA V feel more realistic. That includes improvements to in-game weather, both in terms of graphics quality (lots of 4K resolution content) and how different weather states cycle.

More destructible terrain, longer-lasting footprints, shadows caused by smoke, and the density of people in the city of Los Santos based on the time of day are also among a bevy of changes that will increase the quality of the simulation in GTA V.

The Pinnacle of V makes vehicles handle more realistically, changes weapons physics so bullets actually have to travel to their targets instead of striking them immediately, and makes the police force patrol more realistically catch players when they misbehave.

You can download The Pinnacle of V here. Note that the graphics enhancements and the world improvements are separate downloads, so if you only want to make the game look better but without changing the way the game world behaves, that’s an option for you.