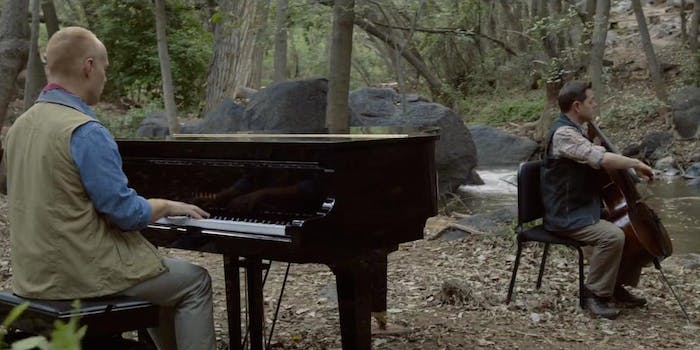 A song 65 million years in the making.

One of the most iconic aspects of Jurassic Park was the music composed by John Williams. Musical group the Piano Guys made the movie’s theme song even more spectacular with their own performance in their latest YouTube video.

The Piano Guys’ arrangement, “Jurassic World Theme,” is a beautiful rendition of the classic music. Crawdad Canyon in Utah acts as the perfect background for their video and despite the lack of dinosaurs, it feels like a fitting place for the song to be performed.

“When you combine Michael Crichton’s imaginative writing, Stephen Spielberg’s cinematic directing, and John Williams’ transcendent composition, it’s an infallible recipe for an epic movie—now relived in the latest iteration of the series, Jurassic World,” the Piano Guys wrote on YouTube. “We thought we’d pay tribute to thi ‘hat trick’ of artistry by arranging a ‘chill,’ almost reverent version of John Williams’ deeply emotive theme from Jurassic Park and film it in the nearest prehistoric place we could find: Crawdad Canyon.”

You can see more of the Piano Guys’ videos on their YouTube channel.