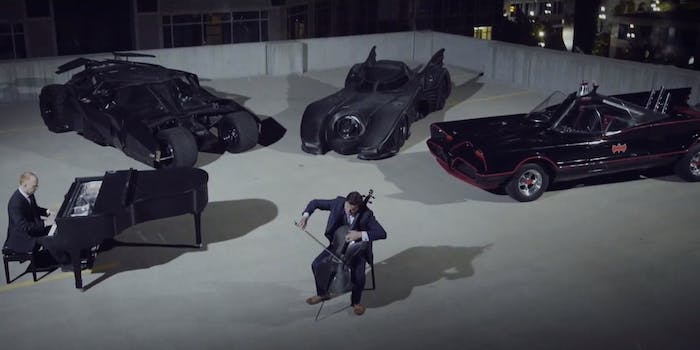 No matter how we’ve seen the Dark Knight portrayed, he usually has some amazing music to accompany him.

Over the last 75 years, there have been many different incarnations of Batman beyond the comic books. No matter how we’ve seen the Dark Knight portrayed, he usually has some amazing music to accompany him, and that’s clear than in a new music video from the Piano Guys.

“Batman Evolution” is a medley that combines three of the superhero’s classic themes. Piano and cello recreate Neal Hefti’s 1966 “Batman Theme,” Danny Elfman’s 1989 “The Batman Theme,” and Hans Zimmer’s 2008 “Like a Dog Chasing Cars” from the Dark Knight trilogy. Each is played separately in a setting reminiscent of that era’s Batman with special appearances by different batmobiles, before the three are intricately woven together. The resulting mix is a sound that will have any Batman fan itching to don a cape and fight crime in Gotham.

Between the music, setting, special effects, and batmobiles, this is an impressive endeavor that does a great job of honoring the legendary superhero as he celebrates some milestone anniversaries this year.