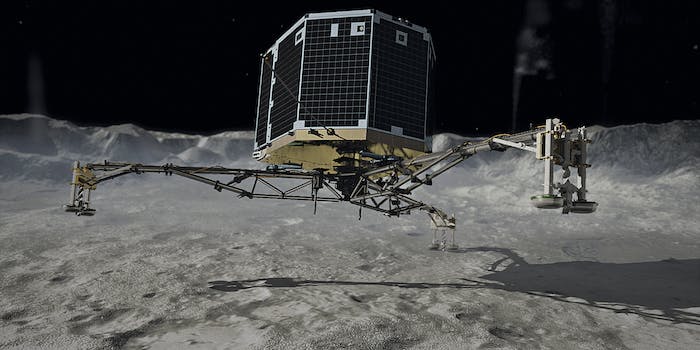 Rosetta's comet probe is awake and transmitting data back to Earth.

After seven months of hibernation, the European Space Agency‘s dormant comet probe, Philae, has woken up.

The Rosetta mission saw Philae land on comet 67P on Nov. 12, 2014, securing itself at an unplanned location with less direct sunlight than expected. The robotic lander transmitted limited data back to Earth before it ran out of power on Nov. 15, going into indefinite hibernation.

ESA scientists and space enthusiasts have been hoping Philae would receive enough sunshine to transmit to Earth once again, and this weekend they got their wish. On Saturday night, Philae sent an 85-second transmission via the Rosetta craft, which is still orbiting around comet 67P.

Hello Earth! Can you hear me? #WakeUpPhilae

The Rosetta mission gained a worldwide following last year, in part due to ESA’s presence on social media. Philae and Rosetta both have active Twitter accounts that “talk” to each other, and Philae’s 384,000 followers have been waiting patiently for the lander to wake up and tweet again.

Wow @ESA_Rosetta! That’s a long time… time for me to get back to work! #Lifeonacomet

Oh, OK @ESA_Rosetta! I’m still a bit tired anyway… talk to you later! Back to #lifeonacomet!

“Philae is doing very well: It has an operating temperature of -35ºC and has 24 Watts available,” said Philae Project Manager Dr. Stephan Ulamec. “The lander is ready for operations.”

Philae’s new transmission included historical data indicating that it must have woken up at some point during the past seven months, but was unable to contact Earth at the time. ESA reports that Philae still has 8,000 data packets to transmit, so the Rosetta team is now waiting for its next contact from the lander.