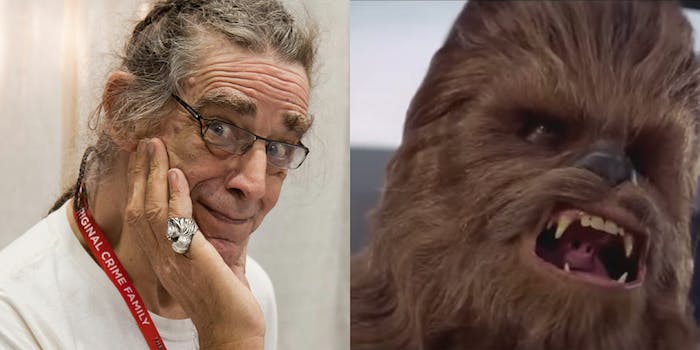 Peter Mayhew, the actor who played Chewbacca in Star Wars, dead at 74

He played the iconic Wookiee for nearly four decades.

Peter Mayhew, the man behind everyone’s favorite Wookiee, died this week. He was 74.

For nearly four decades, Mayhew played Chewbacca, the 7-foot-tall brown, furry companion to Han Solo with an iconic howl. Mayhew appeared in the original Star Wars trilogy, Revenge of the Sith and The Force Awakens before working as a consultant on The Last Jedi.

“The Star Wars family meant so much more to him than a role in a film,” said a letter from Mayhew’s family posted to his Twitter account on Thursday.

In the note, Mayhew’s family goes on to describe his rich life off-screen. Mayhew remained heavily involved with nonprofit organizations like the 501st Legion, Wounded Warriors, and Make-a-Wish in addition to creating his own, the Peter Mayhew Foundation.

Mayhew died on Tuesday in his Texas home surrounded by family. The post, which includes a photo of the actor alongside Chewbacca, garnered 45,000 likes and 25,000 retweets in less than two hours.

The family of Peter Mayhew, with deep love and sadness, regrets to share the news that Peter has passed away. He left us the evening of April 30, 2019 with his family by his side in his North Texas home. pic.twitter.com/YZ5VLyuK0u

On Twitter, fans shared their condolences along with pictures and GIFs of the famous Wookiee. Many thanked the actor for bringing Star Wars’ iconic character to life.

Thank you for bringing to life such an iconic character pic.twitter.com/G0PR8B2Rjz

Of course, many fans couldn’t help but think of Carrie Fisher, the actress behind another iconic Star Wars character, Princess Leia. Fisher died in 2016 from cardiac arrest.

Twitter user Frank O’Connor, @franklez, summed up the sentiment well: “Thanks for forty years of magic and love.”