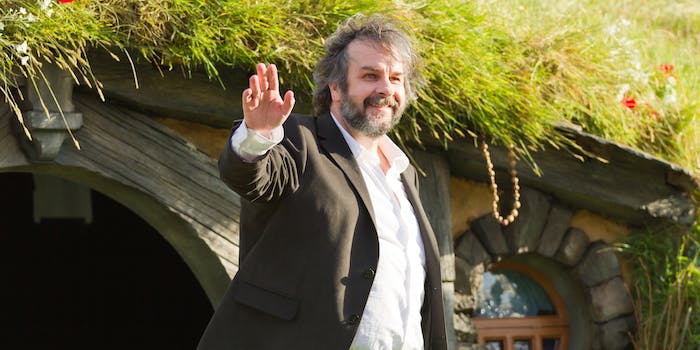 Originally called There and Back Again, the final movie is now titled The Battle of the Five Armies.

Director Peter Jackson revealed on his Facebook page today that he changed the name to the final Hobbit film.

This isn’t shocking for attentive Hobbit and Lord of the Rings fans; just last week, TheOneRing.net reported that New Line had registered the title The Hobbit: Into the Fire. The Battle of Five Armies name was registered as early back as July 2012, and TheOneRing.net staffer Demosthenes theorized at the time that There and Back Again was only a holding title.

Jackson explained on his Facebook page that originally when The Hobbit, a 300-page book, was set to be only two films, There and Back Again was a perfect title for the story of Bilbo Baggins’s arrival and departure in Erebor, the land belonging to the dwarf prince Thorin Oakenshield.

That all changed when The Desolation of Smaug was introduced as a third movie to bridge the two films originally planned.

“When we did the premiere trip late last year, I had a quiet conversation with the studio about the idea of revisiting the title,” Jackson wrote. “We decided to keep an open mind until a cut of the film was ready to look at. We reached that point last week, and after viewing the movie, we all agreed there is now one title that feels completely appropriate.”

Jackson also touched on the extended edition of The Desolation of Smaug, but people are more interested in the title change.

The move makes sense in terms of the plot. The Battle of the Five Armies takes up almost an entire chapter of The Hobbit, and it’s likely that the battle will be a good chunk of the final film, especially if the battle scenes in The Two Towers and The Return of the King are any indication.

Despite what may be a more representative movie title in the long run, some fans can’t help but feel the title should have stayed There and Back Again, which was the name of Bilbo’s book of his travels that he was working in both An Unexpected Journey and The Fellowship of the Ring.

They’ve taken to Twitter to guess what could happen in the upcoming film, as well as to suggest alternate titles.

#MovieFACT The third Hobbit film was originally titled: The Hobbit: They All Have a Bit of a Fight, But it All Gets Sorted Out in the End.

#MovieFACT The third Hobbit film was originally titled: The Hobbit: They All Have a Bit of a Fight, But it All Gets Sorted Out in the End.

The Hobbit : Can it finally be about the freaking hobbit and not the dwarves ? #AltTitlesForTABA

There may have been a title change, but at least there wasn’t another movie split.

Part 3 of #TheHobbit is now called THE BATTLE OF THE FIVE ARMIES, as per PJ on Facebook. How long until it is split into three more films?

Maybe Jackson is a Game of Thrones fan?

I hope THE HOBBIT: THE BATTLE OF THE FIVE ARMIES is just Joffrey’s midget stage show from Game of Thrones two weeks ago.

The Hobbit 3: Completely Given Up on the Young Girl Audience

And as Jackson continues to finish his final film, a final word.

The Hobbit: Even I, Director Peter Jackson, Am Starting To Tire Of This