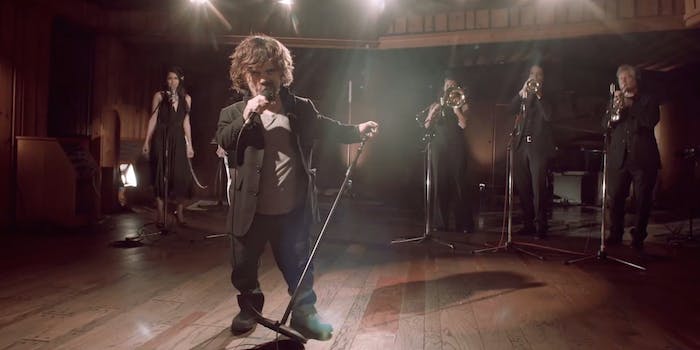 A singing Tyrion? You better believe it.

On a show where your job security isn’t guaranteed by the text of the source material, it’s always a relief to read a script and see that you survive the episode. Just ask Peter Dinklage—it’s enough to make him sing.

Game of Thrones already has some musical elements, but for it to be the depressing-yet-twist-laden showstopper it needs to be, the music can’t be left to the amateur bards. That’s why Coldplay—which already has ties to Game of Thrones courtesy of a cameo from drummer Will Champion—is teaming up with the HBO series to make its musical dreams come true for Red Nose Day, a comedic fundraiser special airing this Thursday.

We’ll have to wait a couple more days to watch the whole musical production, but for now we have a clip of Game of Thrones star Peter Dinklage spoiling earlier seasons and expressing his joy that Tyrion is still alive.

You know, we may have to rethink where we put him on that musical career list now.

Although we only see Dinklage in this clip, he’s far from the only person participating. Both current and former cast members are getting in on the fun.

We’ve partnered with @GamesOfThrones for something BIG (& MUSICAL!) for @RedNoseDayUS! Watch Thur at 8/7c on @NBC. pic.twitter.com/5ZWMzRSUw7

Just remember: If someone starts playing “The Rains of Castamere,” run.