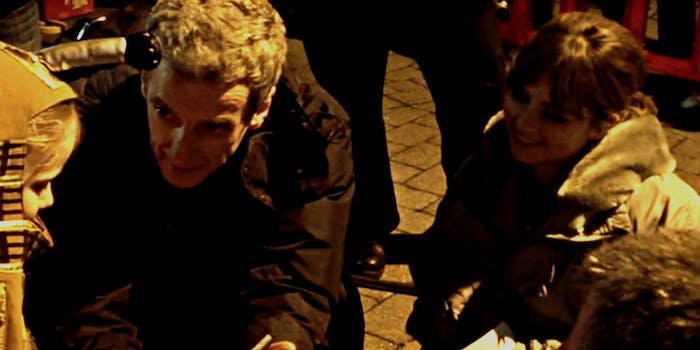 Peter Capaldi convinces all of us that he's the perfect Doctor in under 30 seconds.

OK Internet, you win, we give in. We’re still miffed that we don’t have a female Doctor, but we’re officially declaring our love for Peter Capaldi.

Since the controversial announcement last year that he would be the Twelfth Doctor, many fans have voiced doubts that he has the chops to fill the shoes of Doctor Who‘s departing Eleven, Matt Smith. Although Capaldi is an Oscar-winning writer and acclaimed actor, notably for the British satirical dramedy The Thick of It, many fans felt he might be too old to play the part of the bouncy time-and-space explorer.

But in this heartwarming interaction with a young fan in an adorable Dalek costume, Capaldi convinces us that he’s the perfect Doctor for the part.

“Matt was very nice to me, as Jenna [Coleman] was, too,” Capaldi tells the fan, a young girl who’s having trouble accepting that Smith is leaving.

They were both very welcoming to me when I came into the Tardis. Matt said to me to look after the Doctor. And he gave me his watch… and he said that in his own way, he was happy that it was me coming in. So I will do my very best to be as fun and as friendly as he is.

Capaldi met the fan during an appearance alongside Jenna Coleman, who played the show’s most recent companion. While Coleman chats with the fan and her family, Capaldi pulls up a picture he has on his phone and shows it to the little girl.

“That’s Matt and Jenna,” the fan points out. Capaldi nods.

It’s more than OK with us.

Various onlookers, including the girls’ parents, captured the whole touching scene in the two YouTube videos below.

Doctor Who returns at Christmas. We can’t wait.