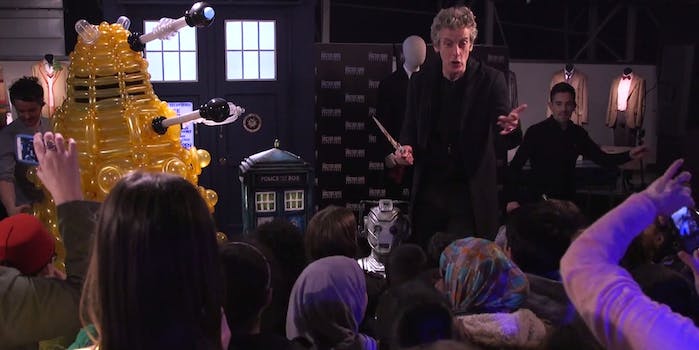 How old is 10 years in Gallifrey time, anyway?

Peter Capaldi rang in the second decade of the relaunched Doctor Who in classic Earth style on Thursday, singing “Happy Birthday” with a gaggle of small fans.

It was ten years ago today that the Ninth Doctor first grabbed Rose Tyler’s hand and said, “Run!” thus introducing her and all of us to the wonderful, wacky new era of Doctor Who. In the decade since, the once-cult show’s mainstream impact has grown so vast that it is now regarded as one of the most popular franchises in television history.

As fans got emotional in honor of New Who’s birthday, Capaldi, who plays the 12th and current doctor, did the honors of singing “Happy Birthday” to himself, accompanied by a chorus of excited kids. Then he cut himself a slice of chocolate Cyberman cake.

If you want to look back at highlights from the last ten years, the YouTube channel TARDISArchives has a full-length nostalgia trip that will make you want to revisit the entire series.