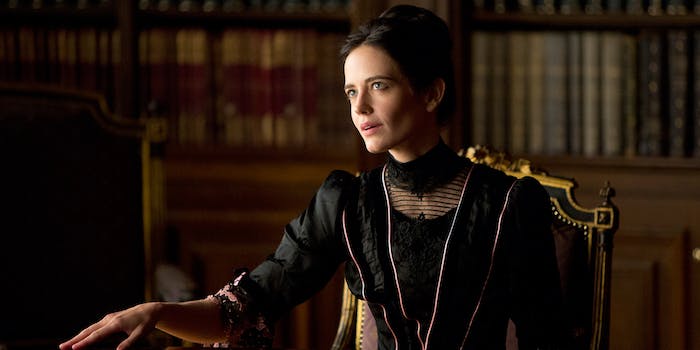 Why you need to be watching ‘Penny Dreadful’

It’s all terribly gothic and British.

Penny Dreadful is a masterpiece of gothic cliche. It’s also likely to stir up one of the biggest media fandoms of 2014, and for good reason.

The first episode aired on Sunday night, but Showtime wisely decided to upload it to YouTube more than a week ago. This gave everyone more than enough time to tweet countless GIFs of Timothy Dalton punching ancient Egyptian vampires, or Frankenstein’s Monster lovingly caressing his creator’s face. In other words, a week and a half of fan-generated buzz to get the ball rolling before the first episode launched for real.

Set in Victorian London, Penny Dreadful combines various classic horror characters with a stellar cast, headed up by Eva Green, Josh Hartnett, and Timothy Dalton, soon to be joined by former Doctor Who star Billie Piper. It follows a familiar model of creating what essentially amounts to crossover fanfic about well-known characters, but without talking down to its audience or needlessly harking back to the original material. Think of Penny Dreadful like a superhero team-up, except instead of superheroes, it’s people like Dorian Gray and Jack the Ripper.

Anyone involved in the making of the disastrous League of Extraordinary Gentlemen adaptation is probably seething with jealousy right now, because Penny Dreadful is basically what that movie should have been.

One significant point in Penny Dreadful’s favor is that it’s adult-rated. This is real, often bloody horror, and there’s none of the simplified exposition you find in more family-friendly pastiche shows like Sleepy Hollow and Once Upon A Time. If anything, it most resembles Bryan Fuller’s Hannibal, except because it’s on Showtime Penny Dreadful can show full-frontal male nudity. It eschews the kind of boring exposition you have to sit through in most pilot episodes, instead launching straight in with entertainingly obscure exchanges like this:

Timothy Dalton: We have an appointment.

Eva Green: Where are we going?

Yes, it’s all terribly gothic and British. Any time that might otherwise be spent having characters explain the plot to each other is instead used to explore cavernous rooms full of bleeding corpses, British Museum offices decorated with human skulls, and Dr. Frankenstein’s lab.

The writers of Penny Dreadful already seem to know that good horror is less about explaining what’s going than it is about not explaining anything. Hence why the bulk of the dialogue in is given to melodramatic speeches rather than plodding exchanges of information. Eva Green smirks her way through an enticingly vague warning about the undead, an eccentric English academic babbles on about his flesh-eating bug collection and how much he loves the word “papyri,” and Frankenstein gives us a goggle-eyed monologue about his desire to “pierce the tissue that separates life from death.”

The big-name cast and big-budget setting virtually guarantee Penny Dreadful’s success, but thankfully the show promises the quality to back it up. You can tell within five minutes that Penny Dreadful only takes itself as seriously as it absolutely has to. For example, the title credits include spiders, scorpions, snakes, and an actual teacup full of blood (so English! Or something), just in case you forgot you were watching a gothic horror story.

But while Penny Dreadful embraces the fun cliches of the genre (see also: flickering lamps, acres of atmospheric fog, creepy crucifix imagery, Victorian opium dens, and the Ancient Egyptian Book of the Dead), it discards all the boring cliches you don’t really need. Most noticeably, there’s no trace of the kind of generic everyman protagonist that we usually see in, well… everything. Josh Hartnett’s character isn’t even much of an antihero. As a kind of failed 19th century Han Solo (to be precise, he’s a sharp-shooter who works as a General Custer impersonator with a traveling circus) his main role is to work as hired muscle for Eva Green, the true star of the show.

Eva Green’s huge, unblinking eyes and ever-present knowing smirk fit perfectly with her character’s air of mystery. It’s easy to imagine her showing up to the audition in full Victorian dress, letting a live bat out of her handbag, and being hired on the spot. A strong contender for the next Morticia Addams. Unfortunately there aren’t any other significant female characters in episode one, but the cast list for the rest of the series looks promising, including actresses from Doctor Who and Harry Potter.

We’ve discussed before why some TV shows inspire the kind of cult following achieved by Teen Wolf, Sherlock, and Hannibal, and it looks like Penny Dreadful is already heading in that direction. It’s beautiful enough that there are already hundreds of fanmade GIFs floating around online, the setup is riddled with intriguing fantasy/horror genre concepts, and it only took one episode to get Tumblr bloggers freaking out about the romantic tension between Frankenstein and his monster.

It also looks like Showtime is launching the kind of social media campaign that specifically aims to create an Internet fandom as soon as possible. Releasing the first episode early on YouTube built buzz before anything aired on TV, and the Penny Dreadful website is already full of official fan projects like a Goodreads book club for classic horror novels like Frankenstein and Dracula.

Then there’s the Dreadful Project (which invited a thousand artists to illustrate their greatest fear as a kind of pre-fanart tie-in to the first episode), a Pinterest account full of Victoriana, a production blog of behind-the-scenes extras, and a mini-documentary about sex and prostitution in the Victorian age. The show even has a Snapchat account, presumably for those who want regular photo updates of dismembered corpses and Eva Green’s gothic wardrobe.

If this extended media campaign sounds cynical, it’s probably because it is. But that isn’t necessarily a problem. If the show is good (and it looks like it is), it will sell itself, and all these fandom-oriented bells and whistles will just help to get people more invested in the show staying on air.

The fact that Showtime gave away the first episode also indicates that it’s following Game of Thrones’ lead and turning a blind eye to online piracy. After all, the more people talk about Penny Dreadful on social media, the more will find out about the show and then (theoretically) buy a Showtime subscription so they can watch it first and avoid getting spoiled.