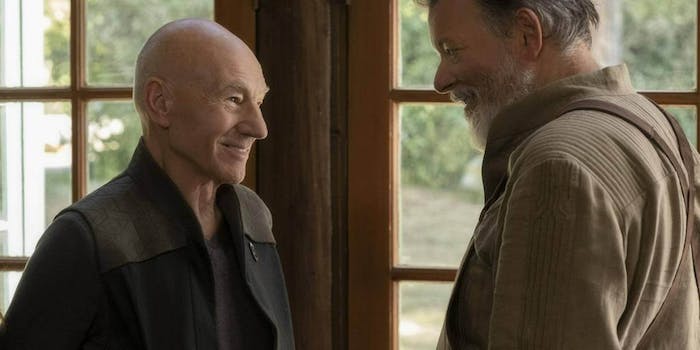 Patrick Stewart: ‘Picard’ had to be darker than ‘The Next Generation’

The show is a response to the era of Brexit and Trump.

Patrick Stewart had a lot of creative input into the vision for Star Trek: Picard, far more so than in the early days of The Next Generation. And according to a new profile in Variety, one of his first priorities was to make Picard darker than TNG.

Gritty reboots are a contentious topic for popular franchises like Star Trek. There’s a prevailing belief that modern audiences want darker, edgier themes, but Star Trek’s brand is synonymous with optimism and a utopian future. While TNG tackled plenty of mature and upsetting ideas, it consistently portrayed the Federation as a utopian society where a lot of social problems (particularly racism and economic inequality) had been solved long ago. The show was defined by ethical debates led by Stewart’s Captain Picard, and the wholesome friendships shared by the Enterprise’s crew—an unusually high-achieving and dedicated bunch that worked on Starfleet’s flagship. Patrick Stewart did not want to retread those themes.

Stewart initially turned down the project in 2017, telling Variety, “I explained to them all those elements of Next Generation which belong in Next Generation, and why I didn’t want to go near them again.” However he changed his mind almost immediately, and showrunner Alex Kurtzman sent over a 30-page pitch for Picard. Kurtzman describes Stewart as “uninterested in repeating himself.”

Stewart is known for his activism and charity work, particularly as a domestic violence advocate. He wanted Picard to be politically relevant, which meant shifting away from the squeaky-clean image of TNG. “The world of Next Generation doesn’t exist anymore,” he explained. “It’s different. Nothing is really safe. Nothing is really secure.” He assures fans that “We are remaining very faithful to Gene Roddenberry’s notion of what the future might be like,” but at the same time, he described the show as a response to the world of Brexit and Trump.

Starfleet and the Federation will be portrayed in a more ambiguous light than before—although this isn’t a completely new idea for Star Trek, considering the number of times we saw captains like Picard, Kirk, and Sisko clash with troublesome superior officers. It’s also worth remembering that while TNG isn’t considered to be a “dark” show, its most acclaimed episodes—especially those featuring Picard in the lead role—were among its darkest, exploring trauma and moral struggles in a time of war.

Picard will pick up 20 years after the movie Star Trek: Nemesis, offering a lot more creative freedom than Star Trek: Discovery, whose first two seasons were unavoidably restricted by their prequel role in the Star Trek timeline. The elderly Picard—now a retired admiral living on his family vinyard in France—is shaped by tragedy, particularly the death of his friend Data, and the destruction of the Romulan homeworld Romulus.

Premiering on Jan. 23 on CBS All Access, the show will see Picard return to action in a politically charged story involving Romulans and the Borg. Most of the main cast are new characters, but we’ll also see some old favorites like Voyager’s Seven of Nine, and TNG’s Riker, Troi, and (possibly just in flashbacks) Data.