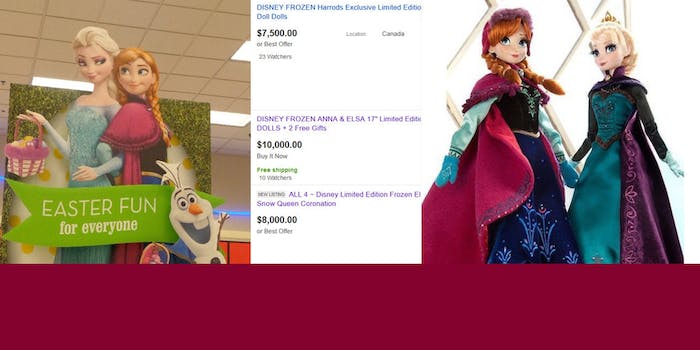 Parents are in full meltdown mode over sold-out ‘Frozen’ merchandise

What do you mean, no more Olaf figurines? These parents are having a hard time letting it go.

Disney’s Frozen recently became the highest-grossing animated film of all time, and although it’s barely left theatres, parents are going into hard-core Easter shopping mode when it comes to finding toys, figurines, and other movie-related merchandise.

To look at Facebook‘s unofficial Disney Store community is to behold a frenzied wasteland where only the strong survive—by which we mean the rich, and the die-hard parents willing to ransack their local department stores for any Frozen merch they can get their hands on. “My Disney store has not had any new Frozen items in forever,” writes one parent. “When will you restock?” frets another. Baffled Facebook parent Maureen Dee writes, “Every store I go to (Disney, Walmart, Target, Toys R Us, etc.) says the stock is nil and when it does come it flies off the shelves. People are waiting outside when the store opens!“

But the prize for passionate outcries goes to Shauna Oddo, whose daughter’s entire worldview is on the brink of collapse:

I have been staying up late every night checking the site. I didn’t think the site would refresh during the day. SO irritated! My girl has been waiting for a classic Elsa doll since Christmas. She can’t understand why Santa didn’t get her one since it was what she wanted most. Now she is hoping that the Easter Bunny will put one in her basket. She has been so patient. I really think this might be what stops her believing in Santa and the Easter Bunny. I can’t afford to spend over $100 on eBay for a $16 doll. This whole situation makes me so sad and angry. Thank you Disney for killing the magic for my 6-year-old.

We feel the need to remind parents that if Disney hasn’t been able to get merchandise out fast enough to meet demand, it’s probably because even the mighty Mouse has limitations on how fast he can move product from some third-world manufacturing facility to your local Disney store. Really, we know kids want their Elsa and Anna dolls, but nothing says “first world problems” like an apocalyptic meltdown on Facebook over a toy.

Meanwhile, over on Ebay, some diehard fans and parents are in fight-to-the-death mode over the rarest of the rare, the limited edition 17″ Harrods Elsa and Anna dolls. One collector recently called the figurines “the holy grail” of Disney merchandise. Only 2,500 dolls were made, and they reportedly sold out in 17 minutes back in November. Now they’re going for more than $1,000 on Ebay.

“You might want to sell your plasma if you’re shopping online,” snarked Facebook user Sarah Alton. “Or your organs.”

The Tumblr frozenmerch has been trying to fill in the gaps by posting as much currently available Frozen merchandise as users can find. Inevitably, heightened media attention has sent antagonists to the Disney Store community to berate the frantic parents for their priorities.

Sounds like we could all use a Frozen singalong of “Let It Go” right about now.