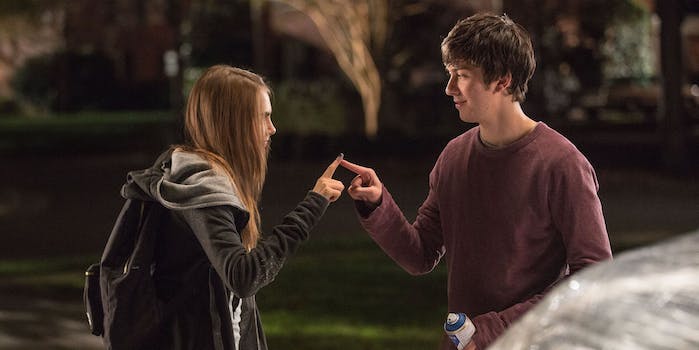 The trailer for the film adaptation of John Green's 'Paper Towns' debuts tomorrow.

The trailer for the film adaptation of John Green‘s Paper Towns debuts tomorrow, but model-actress Cara Delevingne, who stars in the movie, posted a quick sneak preview to tide us over.

Paper Towns comes from the same production team (and in the case of actor Nat Wolff, one of the same stars) as John Green’s 2014 smash hit The Fault in Our Stars. It’s aimed at a similar young-adult drama audience, although everyone involved will probably spend the next few months stressing the difference between the two movies.

Nat Wolff stars as Florida teen Quentin “Q” Jacobsen, whose life changes after he agrees to join his neighbor Margo Roth Spiegelman (Delevingne) on a late-night revenge spree. Margo fails to show up for school the next day, and when her parents finally admit that she’s gone missing, Q decides to try and track her down.

A sneak peek for you. Watch the full #PaperTowns trailer tomorrow morning! @papertownsmovie

For those who read the book, you’ll recognize a few key scenes: Q and Margo looking out on the Orlando skyline, the metaphor-loving detective who questions Q about Margo’s disappearance, Q and his friends road-tripping north, and one more that hints at the story’s ending.

USA Today posted some photos from the movie, but unless you’ve read Paper Towns, the stills just look like regular pictures of teens hanging out in the suburbs. Which is good—anyone who’s used to Delevingne the supermodel might be floored by how much she looks like a normal teen, albeit one alluring enough to lead a boy on an obsessive quest to save her.

Paper Towns is due out on July 24, an agonizing four-month wait for the book’s many fans. Time to rewatch John Green’s behind-the-scenes vlogs from the movie set!