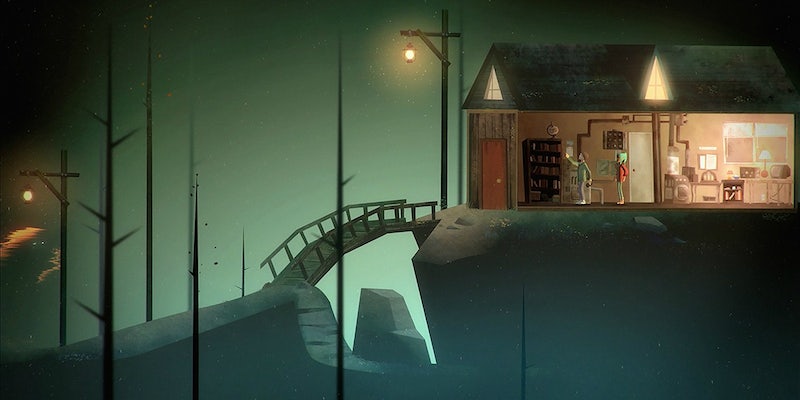 Sometimes you need to find the right form for an idea.

Oxenfree sometimes feels like a walking, talking concept pitch, a vehicle for a compelling plot that needs a larger venue.

The indie adventure game follows the story of five teenagers who take the last ferry of the day to Edwards Island, the site of a decommissioned military base, for an annual beach party attended by a gaggle of their classmates.

You take the role of Alex. She’s brought her new stepbrother, Jonas, along. Clarissa, who used to date Alex’s brother Michael before his untimely death, is accompanied by her friend Nona. The excursion is planned by Ren, Alex’s oldest friend.

It turns out there is no party waiting for them on the island. Alex and her friends are the only ones there as the island’s long-time caretaker died and was never replaced. Of course it also turns out that something sinister is waiting for them. Alex accidentally rouses a supernatural force on Edwards Island and spends the majority of Oxenfree trying to correct the mistake.

Oxenfree was written by an alum of Telltale Games, and the story ends with a tally of the major decisions you made in governing your relationships with the other kids and how many other players made the same choice. This, coupled with a Twilight Zone-style ending, are obvious incentives to give Oxenfree another playthrough.

The final scenes are the only ones I’m interested in replaying, however, and I don’t want to commit to another 7-9 hour playthrough. Oxenfree takes place on a very small map, demands a good deal of backtracking, and prevents the characters from becoming too sympathetic by keeping them removed from the player.

A single playthrough should also be enough to make the island cough up its full trove of secrets. Unless you conducted a summary playthrough the first time around, there probably won’t be much waiting for you during a second run. Rather, you’ll have a lot of stuff to slog through between the interesting moments. 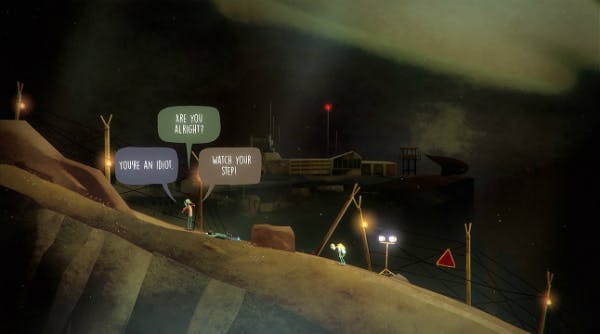 Oxenfree is played via a side-scrolling interface, with the camera placed at a considerable distance from the characters. Color-coded word bubbles appear over the heads of the speakers and dialogue is punctuated with gesticulations to make sure you always know precisely who is speaking.

The distance between you and the characters is shortened only slightly, in only a few scenes, and is never enough to see their faces. The only time you really see what anyone looks like is when you switch to a sub-menu and examine a series of seven photos that the kids take over the course of their adventure.

In those photos you see characters in an art style that seems to marry Disney and anime. Bright eyes, innocent faces, blue hair for Alex, the art is pleasant and inviting. You might want to get to know these people, given the opportunity.

Rather than faces you can relate to, however, you get very tiny figures with stick-like arms and legs throughout the vast majority of your experience with Oxenfree. Listening to the dialogue sometimes felt more like listening to a radio show than playing an adventure game.

The dialogue breaks up what often felt like tedious journeys while Alex walks around the island to turn on a generator, or activate a radio, or search for a missing friend. Oxenfree’s watercolor-style backgrounds and cartoon-like art are distinct and interesting, but walking up and down a path is still walking up and down a path no matter how good the environment looks.

At times I wished for a fast-travel option, but that would have truncated necessary opportunities to deliver considerable amounts of dialogue. It often feels like Oxenfree is in a rush to cram as much conversation as possible into short lengths of time in an ongoing exercise of tell, don’t show. 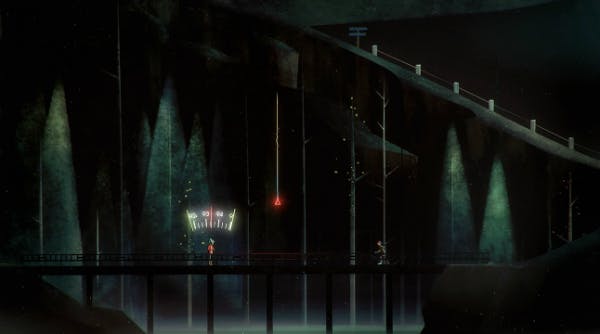 Oxenfree’s plot feels very similar to The Philadelphia Experiment. It’s about rips in time, tortured souls, and it absolutely carries the game. I tore through Oxenfree in two, long sessions, stopping only for sleep and food because I simply had to discover the explanation for what was happening on the island, and to see how the story resolved itself.

The soundtrack begins with a score that sounds like something out of Better Off Dead or One Crazy Summer, which later develops into a satisfying mix of styles. A recurring, haunting theme that is triggered whenever Alex has to mess with the nature of time sounds like a twisted version of circus music, and it’s used to excellent effect.

The sound design in general is superlative. The main source of interactivity in Oxenfree is built around a radio carried by Alex. By tuning in to different frequencies she can trigger dimensional shifts, listen in on etheric messages, and control supernatural events. Her radio can also pick up old broadcasts whose subject matter often seems to pertain to the situation at hand, and builds a subtle horror underneath events.

You will probably want to avoid tuning in some of the radio stations if you’re easily creeped out, but you may feel compelled to once you realize how the broadcasts can reflect the story.

Determining the correct frequency at which to tune the radio for a specific task is simply a matter of turning the dial until the display begins to glow and the control pad begins to rumble (reviewers were recommended to use a control pad even with the PC version of the game), so it’s not a matter of puzzle-solving.

Other than these instances of using the radio, Oxenfree, like most adventure games, is a matter of simply walking through the story. The locations of notes to discover and read evince themselves clearly. Places where you can open rifts are marked just as readily. Discovering collectibles isn’t so much an exploration of the environment as an extended exercise in backtracking. 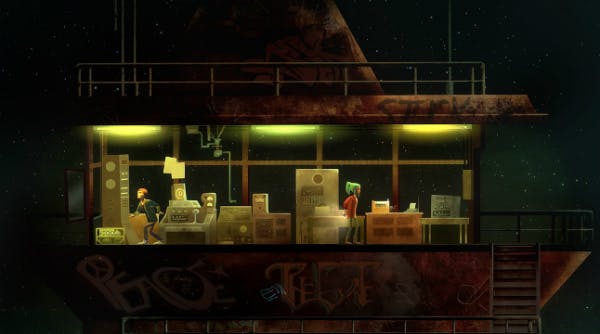 In traditional adventure games, even if the experience amounts primarily to dialogue choices and walking through the story, the action is also punctuated with cutscenes. Oxenfree lacks this element, so a second playthrough to experiment with different choices will require a lot of slogging through the same wide-angle shots and simple interactions with the environment that I doubt would change the second time around.

What I kept thinking about while I played Oxenfree was the need to find the proper form for an idea. You think it’s a movie, but it’s actually a novel. You try to write a poem, that is actually a song.

Night School Studio, the developer of Oxenfree, and Skybound Entertainment, the company that manages The Walking Dead multimedia empire, have announced a partnership in which Oxenfree will be adapted into film and other media projects. I have every reason to believe this partnership will be fruitful, because Oxenfree’s plot is so compelling.

I’d rather revisit the story via one of these adaptations than play the game again. I still might go back to replay that ending, but I’m not going to like having to trudge through so much to get there.

Disclosure: Our Xbox One review copy of Oxenfree was provided courtesy of Night School Studio.