Overwatch is one of the year’s biggest games, and Blizzard has kept fans involved since launch with free content updates including new characters, maps, and multiplayer game modes. Blizzard also publishes online comics that flesh out the world of Overwatch and its diverse cast of characters. The latest release, Reflections, is centered around Christmastime and features one certain frame that has divided the Overwatch fandom.

Tracer, the character primarily featured on all the game’s marketing, is seen at home sharing a kiss with her partner Emily, confirming that she is the first openly LGBTQ character in the game. Many players were ecstatic to see that the character on the game’s cover is openly gay.

Tracer, cover girl for the massively popular Overwatch, arguably the best game of the year, is gay y'all. pic.twitter.com/FkEF3jxPnN

However, some players took the Blizzard forums to express their distaste with Blizzard’s decision to reveal Tracer’s sexuality. 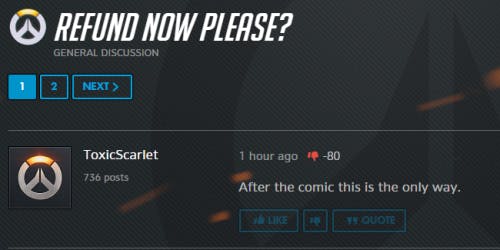 Not all fans shared in this sentiment.

I'm so angry to discover Tracer's a lesbian! Now I'll never have a chance with the cartoon video game lady!

INTERNET: Let Tracer's butt be the way Blizzard wants it's their vision
BLIZZARD: Tracer has a girlfriend
INTERNET: Tracer can't be gay WTF

Blizzard released a statement to Kotaku regarding the decision to reveal Tracer’s sexuality in this way.

As in real life, having variety in our characters and their identities and backgrounds helps create a richer and deeper overall fictional universe. From the beginning, we’ve wanted the universe of Overwatch to feel welcoming and inclusive, and to reflect the diversity of our players around the world. As with any aspect of our characters’ backgrounds, their sexuality is just one part of what makes our heroes who they are. From the very beginning of our work on Tracer’s story, it just felt right to make this an aspect of her character.?

The Reflections comic also touches on what the other Overwatch characters are up to, though none of their exploits have stirred up as much of a reaction as Tracer’s.