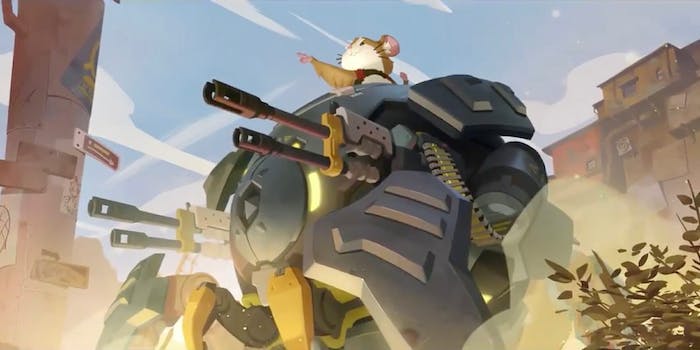 Overwatch’s newest player is an adorable and deadly hamster

Overwatch introduced players to the newest hero on its roster Thursday, and it’s an impossibly cute hamster inside of a powerful (and deadly) circular mech.

Clocking in at just 10 seconds, the teaser of the new hero posted by Overwatch’s Twitter account is brief but effective. The ball-shaped mecha—which is called a Wrecking Ball—rolls in, shows off its immense gun power, and the top opens up to reveal an adorable hamster inside. The hamster giggles.

A subsequent video from Blizzard reveals that the hamster’s name is Hammond. Often designated as “Specimen 8,” the former Horizon Lunar Colony test subject eventually became a force to be reckoned with inside of his Wrecking Ball in Junkertown. And from what we’ve seen of the mech, it’s more than prepared to join the multi-player fight.

Incredibly enough, someone on Reddit had a detailed theory arguing that Hammond was a hamster and was spot-on about the entire reveal.

We won’t know how he plays until he’s added to the game. But no matter how powerful he may be, there’s still an underlying and wonderful fact about all of this: Hammond is an adorable hamster. That’s it really, but he is still making much of the internet happy.

For one, Hammond’s inherent cuteness already makes him a great subject of fanart.

And whether people are comparing him to Hamtaro (the main character in a Japanese manga and anime full of cute hamsters) or an upgraded real-life hamster, he’s already rife for memes.

Look, it’s been a really long and terrible week and it’s still only Thursday. Most of the news is terrible no matter what direction you look in, so let’s appreciate the smaller and joyful things in life. Especially if that involves a soon to be playable cute and murderous hamster inside of a mech ball.