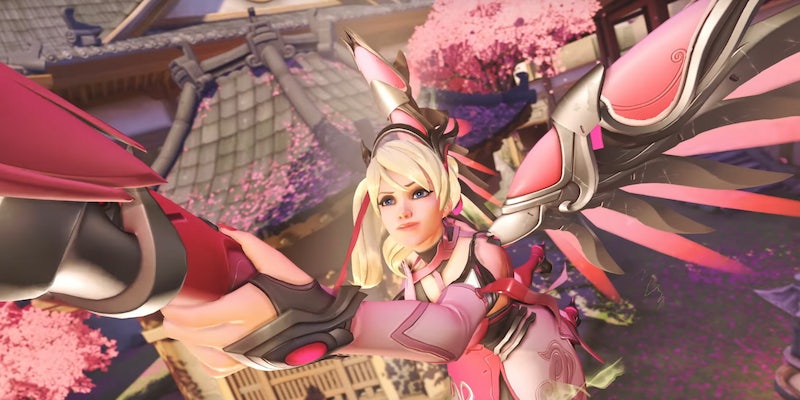 Blizzard gives back by giving to players.

Overwatch has received its fair share of praise for selling loot boxes that offer cosmetic changes (like outfits and graffiti sprays) rather than altering gameplay. Now their cosmetic business has proven to benefit cancer research by raising over $12 million for the Breast Cancer Research Foundation.

Overwatch debuted the Pink Mercy skin back in May, which donned the normally white and orange-clad healer in an all-pink outfit that evoked the iconic pink ribbon symbol associated with breast cancer.

The Breast Cancer Research Foundation is a nonprofit that supports and organizes for continued breast cancer research funding. The BCRF, which was founded in 1993, is the highest-rated breast cancer organization in the U.S. and has raised over half a billion dollars.

Players purchased the skin for $15, as well as T-shirts designed by community artist VICKISIGH. All proceeds went to the BCRF.

Overwatch fans also drew up some pretty incredible fan art and stitched together some killer cosplay to celebrate the fundraiser.

Players earned additional in-game cosmetics by watching a set number of hours of livestreams. These included BCRF-themed icons and sprays that featured either Pink Mercy or female Overwatch cast members.

Women in Overwatch’s professional esports division have faced an uphill battle, contending with false accusations of cheating or inability. The Overwatch League did sign its first female player, the 19-year-old “Geguri,” back in February, to the Shanghai Dragons. Geguri previously shot down critics by livestreaming her skills as the character Zarya.

Daily Dot also ranked every Overwatch character from worst to best, for those looking to make their argument on the coolest healer or dumbest assault specialist.