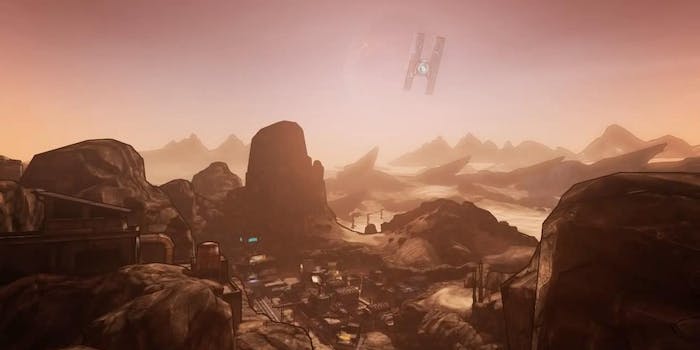 YouTube's Other Places lets you step inside a game and appreciate its scenery anew.

While some have taken to exploring the hidden visual potential of dated graphics systems, others are celebrating the richness of contemporary video game design. Other Places, a YouTube series by Andy Kelly, immerses us in these meticulously designed locales—without our swords and rocket launchers—in order to give us a better appreciation of their artistic merit.

“Their job is a tough one, especially when it comes to open world games,” Kelly said of game designers to the Independent, “because players like me are nosy. We’ll scour every inch of their creations, looking for secrets and details; something, say, a film’s production designer doesn’t have to worry about.”

Those explorations yield strangely compelling dividends: Check out Pandora, a planet from Borderlands 2, and you’ll see a wild, distant frontier, dripping with lava and crackling with storm clouds, in the process of industrialization. People have tried to tame this landscape, but it threatens to burst forth regardless and drown the accumulations of human enterprise.

Other games, meanwhile, strive to recreate a world that did once verifiably exist. Take the most recent episode, which splices together scenes from Mafia II that capture the mood of 1940s-1950s New York City, from snow falling over the Brooklyn Bridge to sunlight filtering through the trees of Central Park. It’s not the sort of thing you’d necessarily notice when focused on assassinating a rival mobster.

Then there’s the unnamed futuristic city from Mirror’s Edge, captured in slow floating shots, with a wealth of dazzling detail: the glint of a rotating sign, the headlights of an approaching train in a subway, the cascade of water in a corporate fountain.

These and other installments, always perfectly scored with a track from a musician prone to pretty ambience, have drawn praise from gamers not just for paying homage to these fully developed environments but for demonstrating to nongamers the capacity for cinematic narrative in a medium all too often considered the sandbox of the immature and creatively stifled.

From fantasy and science fiction to history and alternate reality, the video games of Other Worlds treat their settings like the only ones possible: mysterious, enticing, and shockingly complete. That we’re allowed to step inside such intricate miniature worlds is a privilege worth being reminded of.