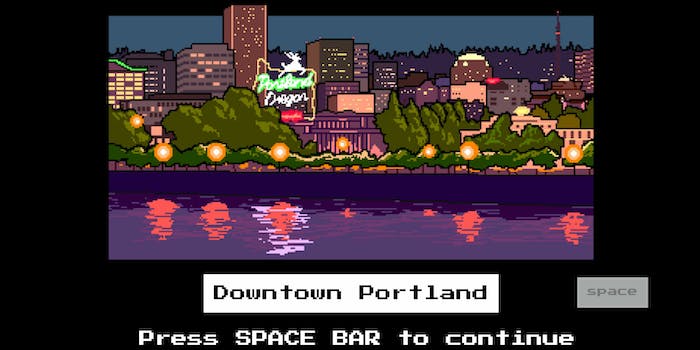 I'm sorry, one of your passengers drank too much kombucha.

Dysentery and accidental gunshot wounds may not have convinced you to go west as a kid, but that isn’t stopping the state of Oregon from using the classic title Oregon Trail to promote tourism. The Oregon Tourism Commission remade the cult video game, updating it with some modern touches.

The free game, Travel Oregon, starts just like the original Oregon Trail and even uses the same aesthetics and mechanics. Like the original, you’re first asked to choose your profession, name, and names of four other members in your party using the numbers on your keyboard.

Next is a trip to the general store, but instead of life-or-dead essentials like oxen, food, and ammunition, you get to buy hipster stuff you’d find at a local Portland shop like Kombucha, artisanal coffee, or craft beer (sorry, no weed).

Once you spend all your money on stinky fermented tea, it’s time to choose a place to visit. You can transport yourself to any of Oregon’s seven main regions to learn more about the area. For example, in Willamette Falls you can go to a hockey game or in Rowena Crest Loop you can mountain bike.

Each of these little events turns into its own mini-game—there’s even a nod to the old Microsoft game SkiFree when visiting Mt. Hood. Of course, you can book actual trips to each of the locations directly from the game using the provided Expedia link.

Despite its not-so-subtle advertisements, this 21st-century remake is just as addictive as the original, so be careful. You might just get lost in it.