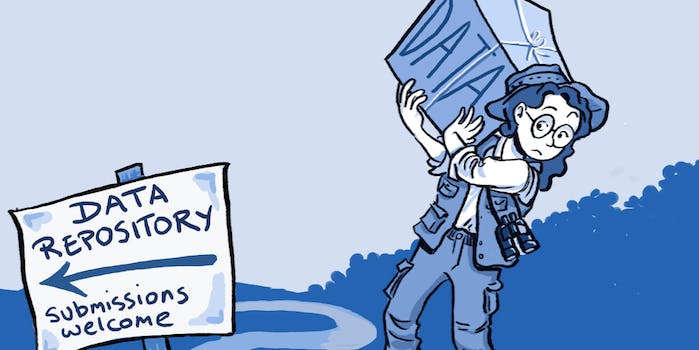 It's Open Access Week. And that's good news for science.

The Internet turned academic publishing on its head. With it researchers and journals began opting to publish open access to improve visibility—paywalls be damned. But science can be strangely steadfast in its habits and most research articles are still not free and open to all.

Some argue that may be a good thing while others—such as PLOS One and BioMed Central—think open access is the way of the future.

To that end it’s the eighth-annual Open Access Week—one to celebrate all things open access in the world of academia. Open access is a new trend in academic publishing where more journals and scientists are opting to make their data free and available to all. Some journals, like PLOS One, are entirely open access, whereas others publish open access on an article-by-article basis.

Generally speaking, publishing open access is meant for the benefit of science overall. It means that researchers looking to deepen their understanding of a particular subject can easily read the literature without having to go through obscenely expensive subscriptions to certain journals. Because open-access articles are published under creative commons licenses, it also means that researchers can create tools to aggregate articles under common themes.

For the layperson, open access also means the average non-scientists can directly interact with the scientific literature—something the U.S. taxpayer may want to do since many studies are government funded. Open access also allows researchers to better their knowledge and understanding: It means doctors have more access to new research.

To understand open access, we need to understand how research is traditionally distributed—physically and at great expense. Academic journals would take papers from researchers, send them off to experts in the field for peer review, and then choose to accept or reject the paper based on those reviews. Then they would publish the article with figures and tables and circulate it to libraries, academic institutions, and whoever paid for a subscription. According to this video published by the slice-of-life-in-academia webcomic, PhD Comics, subscriptions to particular journals can cost a library thousands of dollars per year.

That means institutions have to pick and choose which journals and publishing houses they subscribe to. If you’re a researcher or graduate student at a particular university that doesn’t subscribe to a particular journal, that means you hit a paywall when you try to access the full text of a journal article. Often you can read the abstract for free, but as we’ve written about before, abstracts are chiefly teasers.

If you’re a layperson who doesn’t work at a university, your access is even more limited to the point of not having access to science at all.

In addition to science’s general sluggishness to change, some lob decent criticisms of open science. Most of the arguments center around the idea of oversaturating the scientific community with a deluge of information. For researchers, this can make it difficult to parse out data and information that is and is not relevant to their own research. For laypeople, it could lead to a misunderstanding of the data—intentional or not—that could lead people to develop misinformed beliefs.

There’s also the defense of keeping at least some science “closed” to prevent its misuse. In 2011 scientists created a particularly virulent strain of the H5N1 flu virus, inciting an ethical quandary of whether or not to publish the data—and how much of the data should be available to those who wish to access the paper.

There’s also the issue of cost. Open-access articles mean that institutions and individuals no longer have to pay for the article. That shifts the cost of publishing onto the researcher (and their institution) instead. This can open the door for some journals to fake peer reviews in order to take advantage of the income from publishing open access. But you can keep track of these predatory journals by consulting an ever-updating list of them online.

If you want to sink your teeth into some open-access goodness, check out our field guide to understanding science online—it’ll help you learn to read and interpret articles. Then hop over to open-access journals like PLOS One and eLife. You can broaden your science horizons by checking out individual open-access articles. Many databases such as Elsevier also have guides to their open-access material. PubMed has a filter for “free full text” articles on every search query to help narrow down results to free and open-access articles only.

You can also check out PLOS One’s blog for more events about Open Access Week.

Photo via Ainsley Seago/PLOS One (CC BY 4.0)