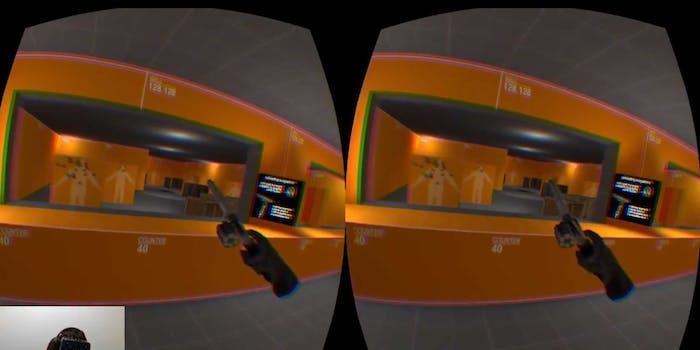 This demonstration of Half Live 2 on Oculus Rift could be a glimpse at the future.

It seems like we aren’t too far off from being able to interact with our games with one-to-one movements.

We all remember the promise of the original Wii. Seeing those commercials demonstrating the motion controller were amazing, but sadly, the final product was more of an approximation of movements versus something more exact.

Now with things like the virtual reality headset Oculus Rift, Kinect, and gyroscopes found in the Wii controller, we may be reaching the point of true one-to-one gameplay. That means ducking for cover, pulling out a sword, and yes, even reloading a gun will only require us to move our hands and bodies as if we were doing the real thing.

YouTuber Goldfish uploaded a video showing off how to reload a revolver in the Half Life 2 mod for Oculus Rift. It’s a simple motion of tilting the gun to the side to open the barrel, dropping in the shells, and reload, but the effect is incredibly engaging.

Now all we need to figure out is physical running. Things like the Virtuix Omni are incredibly close to getting that down. This could both solve Michelle Obama’s initiative to get kids more active while also bringing us closer to a real-life Matrix robot apocalypse.