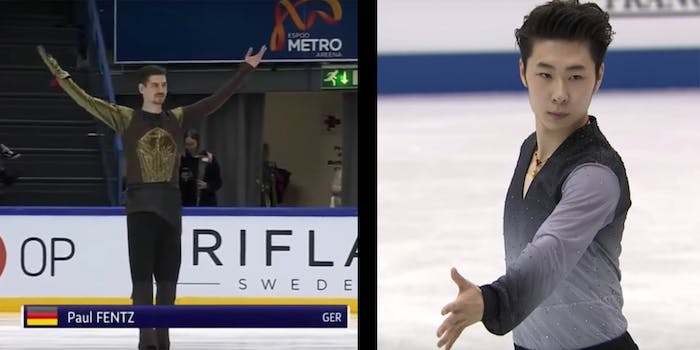 The soundtracks were amazing.

German figure skater Paul Fentz did the unspeakable when he performed his short program routine to Paul Anka’s cover of Oasis’ “Wonderwall” at the 2018 Winter Olympics. Fentz, however, redeemed himself completely when he performed to music from Game of Thrones during the men’s free skate event on Friday.

Sporting a single gold glove and a knight’s uniform, Fentz channeled his inner Jaime Lannister as he performed to the suspenseful music. Here’s a version of Fentz’s routine from GER Free Skate Finlandia.

This was the 25-year-old’s first time competing in the Olympics. He earned a score of 139.82 for his “Game of Thrones” free skate. With his score of 74.73 from the short program, he ended the men’s singles competition with 214.55 points and landed in 22nd place.

While Fentz didn’t come anywhere close to medaling this year, he became a crowd favorite for his free skate performance.

Paul Fentz is skating to the Game of Thrones soundtrack. God bless the sport of #figureskating

Everyone knows that #GameOfThrones is the air I breathe… I need Paul Fentz’s performance in full without the commentators at the #Olympics and I need it as soon as humanly possible. This is a necessity.
But no commentary.
They talk over every performance.
Twitter come through.

Fentz wasn’t the only male figure skater to incorporate iconic pop cultural music this year. Later in the evening, Chinese skater Jin Boyang performed his short program routine to a medley of music from Star Wars: The Last Jedi. Here’s a version of his routine from the Four Continents Championships.

JIN BOYANG ON THAT STAR WARS THROWING THOSE QUADS

Was so excited when I realized that Jin Boyang was skating to Star Wars soundtrack. An amazing performance filled with emotion: grace, triumph, and playfulness. Great job.

Boyang’s performance marked the second time the Chinese team incorporated the Star Wars score into a routine this year. During their free skating competition, athletes Yu Xiaoyu and Zhang Hao performed to “Duel of the Fates” from The Phantom Menace and “Luke and Leia” from the original trilogy.