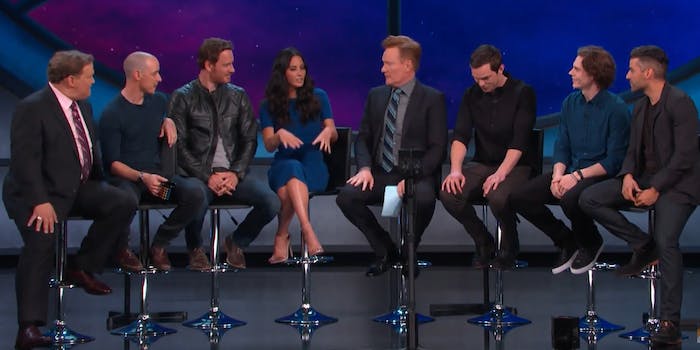 Who thought this was a good idea?

Despite the hype, Comic-Con interviews are usually kind of vapid. They rely on spoiler-free anecdotes from A-list actors pretending to be comic book nerds, and the general goal is to be inoffensively entertaining.

Apparently, elevating the conversation was too much to ask from Conan O’Brien this weekend.

Conan has interviewed several star-studded casts at SDCC, including some of the actors from X-Men: Apocalypse. For some inexplicable reason, this involved Conan asking Olivia Munn about her skin-tight latex Psylocke costume, while Andy Richter and five of her male co-stars snicker and pretend to be turned on in the background. Hilarious!

This has got to be the nadir of the sexist superhero interview genre. Munn surrounded by seven dudes, apologizing that her boobs aren’t as big as a fictional character’s.

Scarlett Johansson has had to tolerate this nonsense for years, getting asked about her diet and underwear choices while her male co-stars answer questions about character development. But this interview may be even worse, just two solid minutes of Conan perving on Munn while James McAvoy cracks jokes about her “lubricating” to fit into her costume.

This was probably a pre-agreed discussion topic to get an easy laugh from the audience, but Munn’s participation doesn’t really make it any less gross. Jokes about her sex appeal were deemed more important than discussing something like Psylocke’s katana skills, and that already tells us a lot about how her character is being marketed.

The whole thing is painfully reminiscent of the Inside Amy Schumer sketch where Schumer plays an actress pandering to a talk show audience by complaining her dress is too tight to sit down, and talking about how much she loves Star Wars.

Women made up 44 percent of the audience for the last X-Men movie, and 49 percent of attendees at SDCC 2015. It’s offensively stupid to keep acting like straight teen boys are the only market for a movie like this.