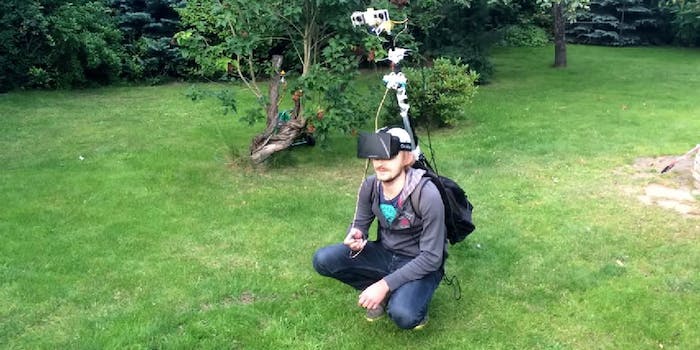 This point of view looks just like a video game.

Mepi, a Polish technology company, has built what is effectively a third-person camera for the real world. The hardware was designed as Mepi’s entry for the “Intel Make It Wearable” challenge.

The device hooks an Oculus Rift virtual reality headset up to a pair of cameras, which are mounted on a pole that stick out from the user’s backpack. The user can then use a joystick to reposition the camera to see from different angles.

Video games in the “third-person” genre are defined by a camera position placed slightly above and behind the player’s avatar by default. Grand Theft Auto V and Super Mario Galaxy, for example, are both third-person games.

Players can almost always rotate the camera in third person video games, so as to get a better view of their environment. This lets them plan where they want to move their character and how they want to tackle upcoming puzzles. Mepi seems to have noticed its third-person camera rig replicates this aspect of third-person games, as well. At the end of the video we see someone wearing this third person rig, and ripping someone else out of their car, a la Grand Theft Auto.

The song running over the footage is also from the Grand Theft Auto V soundtrack.