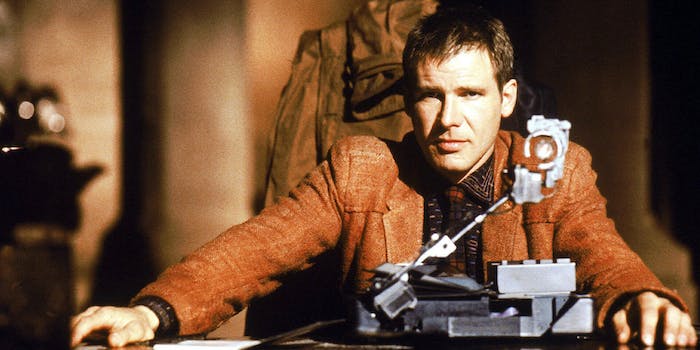 Yes, we all know that November 2019 is ‘Blade Runner’ month

Everyone on the entire internet is now posting the same 'Blade Runner' screencap.

Iconic dystopian movie Blade Runner begins in November 2019, and sci- fi fans will not shut up about it on Twitter.

Last night saw a glut of posts pointing out the same thing: That Blade Runner month begins today. Akira, Robocop and The Running Man all take place in 2019 as well, presumably because it was an appealingly futuristic-sounding year back in the 1980s. (The original Mad Max is set in 1994, suggesting an alarmingly pessimistic attitude from writer/director George Miller.)

This is the very last day we can refer to Blade Runner as a film that's set in the future. pic.twitter.com/Qs1Jve8ABV

This seems to be a universally compelling idea because everyone loves Blade Runner, and real-life headlines are full of news that reflects the darker elements of the film’s dystopian world. Half of California is currently on fire. Google is probably harvesting your Fitbit data as we speak. America’s police are heavily militarized. So yes, real life now feels like a much less stylish version of Blade Runner. It’s also kind of quaint to think that just one generation ago, it was vaguely plausible that we’d have regular interplanetary travel and realistic androids by 2019.

All that being said, can people please stop posting the same thing over and over again? “Did you know Blade Runner is set in 2019?” has become this year’s version of when everyone started pronouncing Super Bowl as Superb Owl. Cute the first few times, but increasingly irritating as time wears on. For instance, here’s someone posting about Blade Runner being set in 2019 during December of last year, prepping us all 11 months in advance:

Well, it's 2019 in a few weeks and Blade Runner didn't get it right. 10 more years until we're in Terminator territory and it's looking more and more likely that's gonna be the movie that nailed it

Watching the original Blade Runner. It's set in 2019. Trump isn't President. Never realized it was such a utopian vision of the future.

If you don’t follow enough sci-fi fans to see viral posts like this on a regular basis, then godspeed to you. But otherwise, let’s all agree to stop posting the same Blade Runner screencap for likes, and instead focus on what’s really important: Upgrading all our wardrobes so we can compete with Rick Deckard and his replicant pals. If you’re going to focus on 2019 being Blade Runner year, then why not really lean into the main reason everyone liked this film in the first place?

Just FYI though, Pacific Rim and A Quiet Place both begin in 2020, so buckle up for a pair of very different but equally deadly alien invasions.