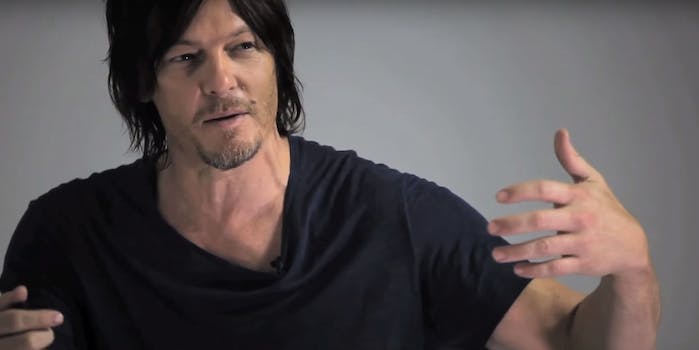 Did Norman Reedus let a spoiler about the big ‘Walking Dead’ death slip months ago?

The interview slip at San Diego Comic-Con didn't appear to be scripted.

Warning: This article contains spoilers for the latest episode of The Walking Dead.

The fate of Glenn Rhee, who may have met his end at the hands of some ravenous Walkers on Sunday night, is the biggest question on Walking Dead fans’ minds right now. But was the answer accidentally revealed to us months ago?

The Walking Dead producer Greg Nicotero and multiple cast members—including Andrew Lincoln, Danai Gurira, Norman Reedus, Steven Yeun, and Melissa McBride—met with MTV for an interview at San Diego Comic-Con back in July. They probably couldn’t talk much about the upcoming season, so MTV instead had them reflect on the past, asking everyone which dead character they’d bring back.

Everything goes as planned, with the cast mentioning some beloved characters, until Reedus—who is resting his head on McBride’s lap throughout all of this—suddenly perks up and chimes in.

The only problem? He mentioned Glenn, who was still alive at the time. He tries to play it off, mentioning Michonne as well (another character who is still alive), but the off-script response did not appear to be planned. Both Lincoln and Nicotero’s reactions to Reedus are evident of that.

But is his response of bringing back Glenn in of itself a spoiler? Right now, there’s a lot of evidence to suggest that Glenn is—for now—still alive. And as far as we know, his comments may only apply to the cliffhanger events in the episode that just aired on Sunday.

As for the rest of the season? That’s another story.