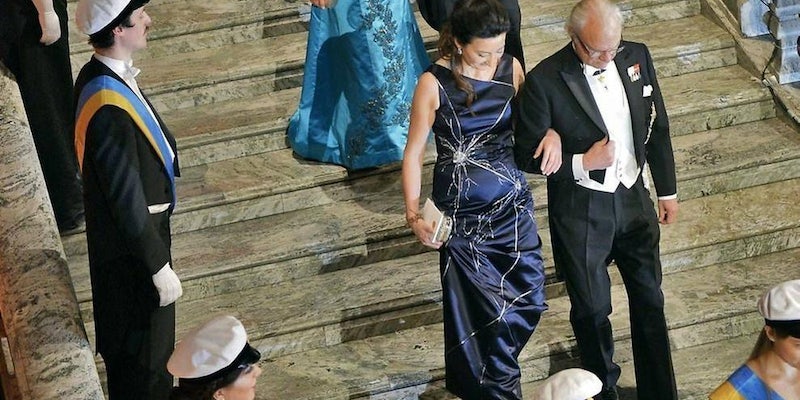 Fashion and science meet on one stunning couture gown.

If you’re going to accept a Nobel Prize, this is how you do it in style. May-Britt Moser of the Norwegian University of Science and Technology’s Kavli Institute for Systems Neuroscience received the Nobel Prize in Physiology for Medicine earlier this month with her husband Edvard Moser and colleague John O’Keefe. The trio won the prize for their discovery of grid cells in the brain that help us make sense of our place in the surrounding environment. To accept the award, May-Britt wore an amazing couture dress displaying these very cells thanks to the efforts of U.K.-based fashion designer Matthew Hubble.

Hubble, a former civil engineer, designed the dress with his partner Maria. It makes sense that the duo tackled such a project since their website states that a love of science and engineering is in their DNA and “the goal of the company is not only to produce beautiful clothes but also to promote the value of Science and Engineering to society, which in turn will inspire future generations to follow the path to being at the forefront of all human knowledge and therefore make the world a better place!”

Work began on the dress before they reached out to May-Britt and the entire impressive process is outlined on their website. The grid cells depicted in such detail on the gown are stunning, and in his explanation Hubble states how beads were the perfect choice for this aspect.

“The neurons has to be an accurate representation; We used a mixture of sequins and beads for the cyton, and created the beautiful synapses similarly, but the myelin sheath on the axons we just couldn’t make look beautiful and so decided a splash of artistic license is allowed after all,” he wrote.

Once the dress was finished, they figured out a way to get in touch with May-Britt and within hours received a reply that she would love to wear the dress to the ceremony. The dress turned out to be very helpful for the neuroscientist. Hubble explains in the video below that she ended up using the dress to help illustrate how the cells worked to the journalists she spoke with at the awards.

“One thing she said was as a scientist she hadn’t previously been that interested in high-fashion but now she sees it can be used as a great communicator. She really appreciates fashion design a lot more now,” Hubble said.

You can see more photos of the dress below and find Hubble’s other science-inspired fashions on his website.