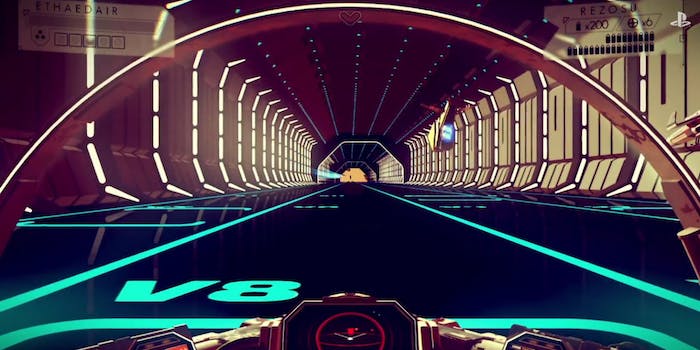 This video delivers another dose of "impressive."

Gamers have spent a year going nuts over the space exploration game No Man’s Sky, and the newest reveal trailer demonstrates why.

No Man’s Sky is a procedurally generated space exploration game. That means no one, not even the developers themselves know what the universe of No Man’s Sky is going to look like before the switch is flipped to create the game world. What has audiences so excited is the fluidity with which players can explore planets underwater and on foot, and then hop in their ships and take to the stars. This has the potential to make No Man’s Sky one of the deepest experiences of true discovery ever developed.

No Man’s Sky is so hotly anticipated that The Game Awards 2014 on Friday sold itself to audiences in large part on new footage from the game. No Man’s Sky was also one of three games that defined the PlayStation Experience event held in Las Vegas this weekend, which is where the above trailer premiered.

In No Man’s Sky, there are rules underlying the game universe that define how different elements combine, how life forms evolve in different types of environments, and everything else that scientifically explains the inner workings of a universe. Those rules are the constraints to how content is generated in No Man’s Sky.

When the game is released, an entire galaxy of worlds to explore will be constructed, based on that algorithm. No Man’s Sky, if it delivers on its promises, will truly be an alternate universe populated by computer-controlled, space-faring civilizations as well as by human players.

That’s a very expensive check developer Hello Games continues to write, with trailers like the one shown at PlayStation Experience. Gargantuan galaxies for space exploration are not unheard of in video games. Elite: Dangerous is currently in beta testing, and promises “100 billion star systems, planets, moons and asteroid fields. It does not promise the ability to smoothly land on planets and get out of your spaceship whenever you want.

No Man’s Sky is slated for a release on consoles and PC in 2015. Uncharted 4: A Thief’s End is also set for a 2015 release date, with no further information. No release date information has been given for Street Fighter V, but it will be released for PC as well as the PlayStation 4.