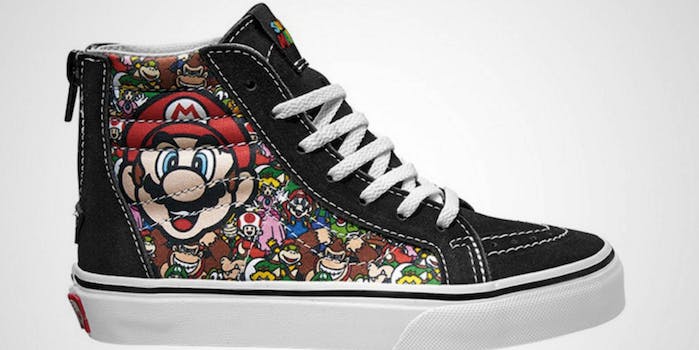 Damn, Vans. Back at it again with the awesome shoes.

Just when you thought the white vans meme was dead, Nintendo brought it back.

No, not like that. Think of “white” as being more of a blank canvas than a color. The manufacturer of slip-ons and high-tops is teaming up with the video game company for a collection heavy on nostalgia and comfort. Designs include 8-bit gems from The Legend of Zelda to Super Mario and Duck Hunt, along with more modern styles. Princess Peach gets her own lace-up low-top, while Yoshi gets the slip-on treatment.

Vans officially teamed up with Nintendo

The massive collection, which includes everything from tennis shoes to flip-flops, wasn’t even supposed to be revealed for another few weeks. A representative for Vans told Kotaku U.K. that companies had intended to unveil it on May 23, with shoes hitting shelves on June 1.

But now fans have a few more weeks than originally planned to dream about the sweet new kicks. Let’s hope Vans does right by Nintendo stalwarts and learns from the disastrous Alien Day debacle.