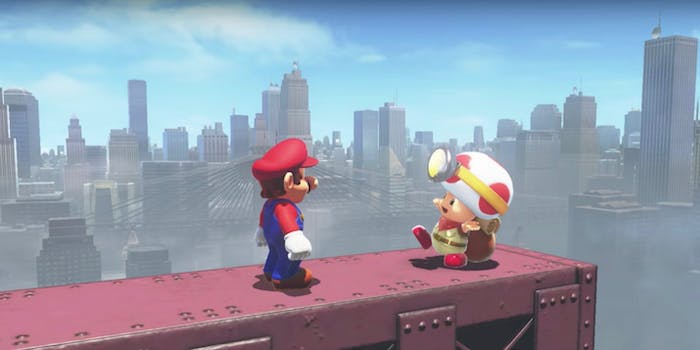 The truth behind Toad's mushroom top is revealed.

After years of speculation, Nintendo is putting to rest the debate over the anatomy of a beloved Super Mario Bros. character.

For all of the fantastical elements in the Super Mario Bros. games, it’s the nature of Toad’s head that sparked questions from fans. Is the character’s mushroom top his head or a hat? Video games and other media have provided contradictory (and occasionally confounding) evidence on both sides of the debate. In some games and videos, Toad has used the mushroom top as a hat and a handy tool, but other iterations have shown Toad wearing a hat on top of the mushroom top, treating it like one cohesive part of his head.

Yoshiaki Koizumi, who produced Super Mario Odyssey, tackled the question for fans during a talk about the game. His answer is definitive yet open-ended: While he confirms that the top is part of Toad’s head, he doesn’t offer detail on how it all works together.

“So that, as it turns out, is actually Toad’s head,” Koizumi said. “I’m going to have to leave it to all of you to figure out exactly how that works out. Maybe there’s something inside…”

Most of the video is pretty spoiler-heavy if you haven’t finished playing Odyssey. Koizumi also touched on Mario’s lack of a belly button, noting that he “didn’t really expect that to be a topic among fans.”