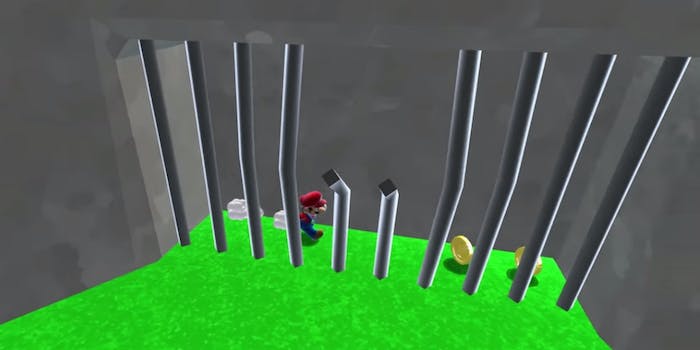 Nintendo's legal complaint shut down the browser version, but it's still available as a download.

On Friday we reported on a high-definition, browser-based remake of a level from Super Mario 64, available for free online. Nintendo is now trying to shut down access to the game.

According to multiple reports, attorneys for Nintendo issued a complaint to CloudFlare, Inc., a web hosting and security company, to shut down access to the site. “The copyrighted work at issue is Nintendo’s Super Mario 64 video game (U.S. Copyright Reg. No. PA0000788138), including but not limited to the audiovisual work, computer program, music, and fictional character depictions,” reads the complaint.

Nintendo has confirmed it issued the legal notice in a statement to the Daily Dot.

“Nintendo respects the intellectual property rights of others, and in turn expects others to respect ours. Nintendo is passionate about protecting its creative works developed to entertain its fans and takes the necessary steps to remove unauthorized content distributed via the Internet.”

While action by Nintendo’s lawyers means you can’t play the Super Mario 64 HD level remake in a browser window anymore, Nintendo has not yet taken action to remove access entirely. Roystan Ross, who programmed the HD remake, still has download links to Windows, Mac, and Linux versions of the game on his website. So you can still play the game, you just have to do so on your computer.

Nintendo’s copyright claim against Ross’s project is clear, given that Ross used so many of Nintendo’s official design assets. But it’s far from the only one. Take this Mario 64 fan remake promoted on Facebook. The creator claims to have built the code from the ground up for the project.

All of the work on this second Super Mario 64 HD remake project is, according to the Facebook page, original work built from scratch. But it still runs into the problem of portraying Nintendo’s copyrighted characters, music, and worlds.

We asked Nintendo whether this other, Super Mario 64 fan remake would be acceptable to the company, if all the assets were built fresh. We did not hear back from Nintendo in time for publication.

Update 4:18 pm CT: Royston Ross has updated his site with the following notice:

The project is no longer playable, or downloadable in any form. I received a copyright infringement notice on both the webplayer as well as the standalone builds. Which is fair enough, really. In light of Nintendo recently making a deal to release some of their IPs on mobile platforms, it’s probably not in their best interests to have a mobile-portable version of Mario 64 sitting around. In any case, I didn’t really expect for this project to get so popular, and was hoping it would function primarily as a educational tool and a novelty. For those who find it interesting and have never played the original Mario 64, it is available on Nintendo’s Virtual Console service.