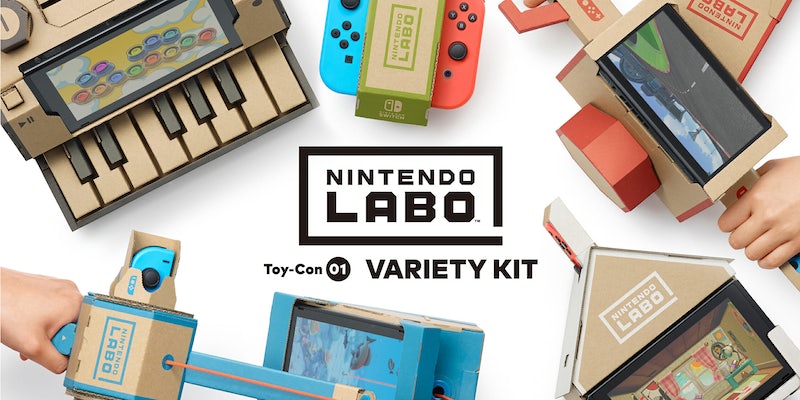 Though the gaming industry has had a rocky history with interactive accessories in the past, Nintendo’s latest foray into physical peripherals arrives as an ideal hybrid of real-world activity and digital entertainment. Unlike the motion-heavy emphasis of Microsoft’s Kinect or the myraid annoyances accompanying any virtual reality headset, Nintendo Labo is satisfyingly simple. Moreover, it feels like the first extension of a game that is excited for you to play with it.

I’ve already covered how surprising and rewarding building with Labo is, but my initial impressions still left me with lots of questions. After exploring everything the Variety Kit has to offer, I have a better sense of Nintendo Labo’s potential. In this $70 pack, you’ll find five accessories to build and a number of software add-ons to mess around with. Each project alone can consume a great deal of your time, and looking at everything together addresses the high price-of-entry promptly.

The very first thing you’ll do after opening the box and putting the Variety Kit software in your console is construct the remote-controlled car. It’s a simple on-ramping meant more to educate users on how to punch out and fold the cardboard, but the end result is still exciting. It should take less than 10 minutes to fold the proper pieces and insert each JoyCon. From there, you’re whisked into a new interface to control the car. All the kits let you start playing as soon as you’re done building, but these screens aren’t intuitive or helpful until you’ve sat through several included tutorials.

Vibrations move the little cardboard car around flat surfaces, even if it isn’t always perfect. It can move in a straight line or strafe in one direction by putting pressure on only one of the JoyCon. There are a few fun minigames involving obstacles and races, but nothing substantial. Making use of the JoyCon’s IR camera, you can look down at the screen to see from the front of the car’s perspective. After building and playing with the car for half an hour, you’ll have seen everything there.

The first real “project” included in the Variety Kit is the fishing rod, which isn’t one of the most time-consuming builds, but comes with some of the best software. Actually constructing each extendable section of the pole is fun, making use of three identical pieces of various sizes as well as incorporating rubber bands and string. A blue stand (called the “ocean”) holds the screen in place and is tied to the rod itself with a long stretch of string.

When you’re ready to start catching wildlife, you need only turn the lever on the side of the toy. This experience feels something like Wii Sports, just with less flailing around. Simply reeling the rod casts it down into open water. From there, you wait to get a bite and pull it back in with all your strength. There’s a good layer of challenge in deeper waters, considering the size of some things you can try to lure in. For bragging rights, everything you catch is saved in a big aquarium accessed from the discovery screen.

Moving on to the bike reveals even more of Labo’s potential. Each handle functions as a steering mechanism equipped with a horn and brakes. This build takes over an hour, and though the final product is sturdy, it still feels delicate. You’re supposed to hold the bike in an awkward position to play the included racing game, wedged right into your gut. Moving the handlebars corresponds with the bike on screen, and twisting the throttle pitches acceleration.

Outside of the various circuits against computer-controlled enemies, you can race another person using their own Labo hardware. There’s a solid programming angle to the experience, using the IR camera to build custom courses and new maps to zip around on. While it may be simple, the peripheral use for a simple racing experience is entertaining after a worthwhile assembly process.

Blocks come into play with the House kit, and demonstrate the functionality of the JoyCon’s camera sensors. The idea behind this mid-sized room is for players to mess around with the inhabitants, switching key elements around by altering the physical peripheral. You can change the time of day, fill the room with colorful objects, and shake the whole set around. If there’s a downside to the house, it is that it mostly sits in one place for the whole time and doesn’t really offer much in terms of tactile fun.

The games in the House are the most digital-focused in the kit, using the screen to project different quirky scenarios. Building the house is a complicated process, with different layers and interlinked pieces to account for. However, there’s a ton of surface area to decorate and personalize, adding on to the overall time spent with this particular model.

ToyCon Piano is the most time-consuming build but it yields the most thorough software. While a great deal of the construction is repetitive—each key needs to be folded in sequence—the final product is a marvel to behold. The Switch screen corresponds with each key pressed by scanning stickers and can morph the output into a variety of entertaining sounds. There’s a chorus of cats and even a warbling effects pedal to experiment with, but simply banging on the keys is only a fraction of the fun you can have with the piano.

In studio mode, users can record and clip together different melodies and beats. Using other inputs, you can construct full compositions, all from the same interface. Getting a hang of the piano’s array of editing software can take some time, but I can’t wait to see what kind of crazy things some in the more musically inclined community come up with. All the tools for creation have been included here, but there’s still room for improvisation.

Nintendo has something truly special on their hands with Labo. If you’re curious how the cardboard kits work, the Variety Kit would be the one to pick up. The Robot kit is a longer, laborious build that is used in some uninspired arcade games. With more tools to build and play with, this package gives you a glimpse of where Labo could go next.

Playing with the Motorbike, I imagined myself swapping it into a future Mario Kart update. I can see the fishing rod being used in a Zelda minigame, or better yet, constructing a cardboard sword to swing around as an adventuring hero. Realizing that these toys can be used to supplement, not replace, traditional games opens the door to a new wave of experiences. For those concerned about the quality of the software included, that just isn’t the point. Building each model provides the meaty “gameplay” you’ll get when you buy in. Labo has me thinking about what else is possible with the Switch and, impressively, managed to make the console feel even more amazing.