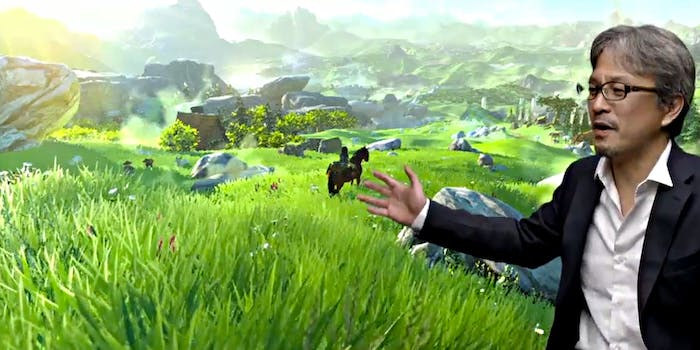 Nintendo teases the next game in the loved Zelda franchise and debuts online multiplayer Splatoon.

Nintendo decided not to bother with a press conference at E3 this year. Instead, the company hosted an E3 edition of a Nintendo Direct digital event. With Robot Chicken-esque animations of classic Mario characters bookmarking game announcements and interviews with the developers, the program was Nintendo to the core.

In what will be the most exciting announcement for a healthy number of Nintendo fans, Producer Eiji Aonuma presented a new Legend of Zelda game for the Wii U. Aonuma contrasted the spirit of free exploration in the original NES title with the more structured design of following Zelda games. Wind Waker, for example, offered an expansive world, but the entrances and exits to each island were set, and there were limited variables.

The new Zelda game, on the other hand, is an open-world game. Aonuma, seated in front of a screen displaying a pastoral landscape from the new game, pointed to a mountain range in the distance and said the player could go there.

One can’t help but think about Skyrim, Zelda-style. The graphics looked fantastic, and the trailer featured what looked like a female hero fighting a giant monster. The new Zelda game for the Wii U will be released in 2015.

But before the much-anticipated Zelda news, Reggie Fils-Aime, president and COO of Nintendo of America, and Satoru Iwata, president and CEO of Nintendo Co. Ltd., kicked off the event starring in an effects-laden Street Fighter-style fight scene. It was an intro for Super Smash Bros. on the Wii U, and there were two significant reveals.

First, Nintendo is getting on the Skylanders/Disney Infinity-type figurine craze. It’s calling the figures “amiibos.” By holding an amiibo figurine up to the Wii U’s GamePad, that character can enter a Super Smash Bros. match.

Developer Good-Feel is working on Yoshi’s Wooly World, which uses yarn as a central game mechanic. The developers, seated against a wall full of colorful skeins of yarn, explained that Yoshi will be able to unravel parts of each level. While Mario games are about master challenges in set amounts of time, Yoshi’s Wooly World will prioritize free exploration of levels. It will also feature a two-player mode.

Nintendo teased Captain Toad Treasure Tracker, to be release in the holiday season in 2014.

Led by a video of a young man exploring a cave, which felt almost surely like a reference to the famous story of Nintendo developer Shigeru Miyamoto drawing inspiration from exploring the area around his home as a child, Nintendo announced Pokémon Omega Ruby and Pokémon Alpha Sapphire.

The newest Pokémon games will launch in November 2014, exclusively for Nintendo 3DS handhelds.

Tecmo Koei presented Hyrule Warriors, a blending of the Zelda and Dynasty Warriors franchises. Dynasty Warriors is a third-person action franchise which sets the player against huge hordes of enemies. The Wii U GamePad can be used for a second player to jump into the game.

Link, Zelda, Impa, and Midna from The Legend of Zelda: Twilight Princess, will all be playable characters in Hyrule Warriors. The game will be released on Sept 26.

Kirby and the Rainbow Curse—in which the titular hero can apparently turn into a submarine, a rocket, and a tank—was teased for 2015. Nintendo also showed a teaser trailer for Xenoblade Chronicles X.

Mario Maker will allow players to design custom Mario levels. The UI looked extremely clean, and the trailer showed a player using the GamePad’s stylus to grab and position level elements onto the canvas.

In what may be the most interesting reveal in terms of Nintendo’s development as a company, viewers got an extended introduction to Splatoon by the game’s developers. The game is an eight-player, four vs. four online action game.

Splatoon is exciting because it represents Nintendo essentially stepping into the online competitive shooter space. Players shoot ink across a level to claim the territory as theirs. An isometric map of the battle’s progress, with territory grabs and allied-player positions clearly illustrated, provides a quick strategic assessment of the situation.

Players are in human form as they spray their ink. They turn into squids to then navigate the pools of ink they’ve laid down. The player can travel through contiguous areas of ink very rapidly for tactical repositioning. They can also hide in ink to ambush other players. Esports potential immediately came to mind as the developers talked about the game.

Splatoon is important because Nintendo has often been criticized for failing to take advantage of the online competitive space, which is staple for every other developer in the industry. Nintendo is planting a flag there, but in its own style, and on its terms.

Nintendo ended its digital event with two teasers. Lady Palutena from the Kid Icarus franchise will be a playable character in Super Smash Bros., and the end of trailer hinted that Dark Pit, also from the Kid Icarus series, will likewise appear in the game.

Finally, Shigeru Miyamoto, shown playing a game on the Wii U GamePad, briefly turned around in his chair to let the viewers know that he was working on new games for the Wii U. Some of the projects will be at Nintendo’s E3 booth this week.

Overall, this was a very smart press event for Nintendo at E3. No one had to file into the Nokia Theater, which is the usual state of affairs. The video production allowed Nintendo to embrace its playful spirit, versus having to deliver a typical stage presentation that has always felt too stolid for Nintendo. And there finally seems to be a healthy selection of games on the way that might inspire Nintendo fans to finally cough up the money for a Wii U.