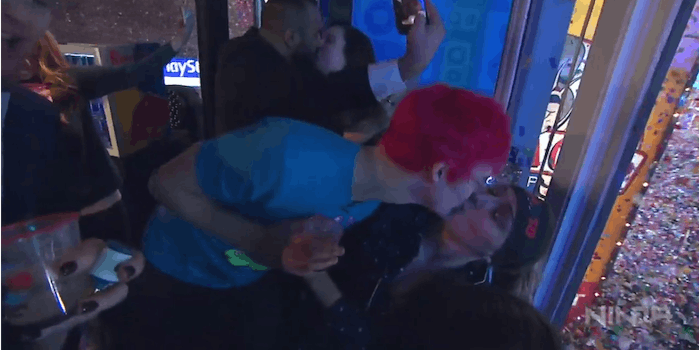 2018 saw a transformation in how video games are played and understood in popular culture. Much of the rising popularity of video games among mainstream crowds was ushered in by Fortnite, a mega-popular multiplayer game. Carrying Fortnite on its rise to the top was Ninja—the top streamer on Twitch and arguably the best Fortnite player out there. Ninja ushered in the new year with a nearly 12-hour stream live from Times Square in New York.

Tyler Blevins goes by Ninja more often than not these days. The shift makes sense, given his nearly 13 million Twitch followers, not to mention the accumulated 15.8 million people following him on Instagram and Twitter. Those people come for Ninja—the first eSport personality to grace the cover of ESPN the Magazine in September—not for Tyler Blevins, the 27-year-old from Illinois.

The young Americans who were old enough to stay up and ring in the new year last night—but too young to do so with a glass of champagne—had the chance to welcome 2019 their own way. These young fans gathered around televisions and laptops beginning at 4pm to join Ninja in his first ever live New Year’s Eve event.

The evening was rife with special guests, giveaways, and surprises, ensuring that viewers wouldn’t get bored during the stream, which lasted all the way to 4am. The entire 12 hours of gaming fun is up on Ninja’s Twitch page, in case you headed to bed before the midnight mark.

For fans of Fortnite, Ninja, or just gaming in general, Ninja’s New Year’s stream is one for the record books. 2018 changed the way the world looks at gaming, and Ninja’s event cemented newfound respect and popularity gamers have earned. It’s impossible to say what 2019 holds in store for Fortnite and gaming in general, but it’s probably safe to say that Ninja is not going away any time soon.