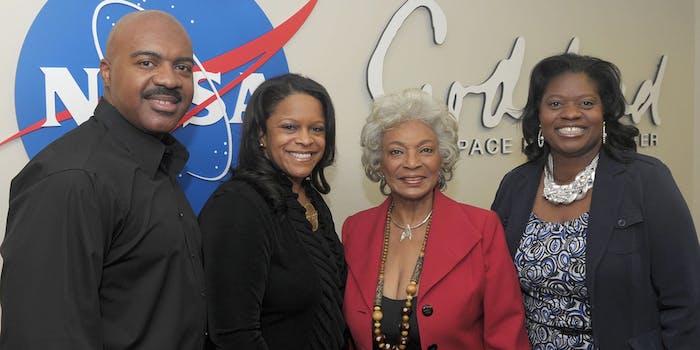 Nichelle Nichols isn't technically going into space, but she's getting closer than most of us ever will.

The actress who handled communications on the Starship Enterprise is headed toward the stars. Nichelle Nichols, who played Lt. Uhura in the original Star Trek series, won’t quite get to space, but she’ll be going in that direction.

Nichols—whose long career included participating in the first interracial kiss on mainstream television and having Martin Luther King, Jr., beg her to stay on Star Trek because she was a role model—announced her upcoming voyage away from the Earth’s gravity during a Reddit AMA last Thursday.

“In September, I’m traveling on a NASA SOFIA flight, a second generation Airborn Observatory, which I am honored to have been invited too,” she wrote in the post that started the AMA.

SOFIA, the Stratospheric Observatory for Infrared Astronomy, is “the largest airborne observatory in the world, capable of making observations that are impossible for even the largest and highest ground-based telescopes,” according to the project’s website. It consists of an extensively modified Boeing 747SP carrying a reflecting telescope with an effective diameter of 2.5 meters (100 inches).

Although the aircraft does not go into space, Nichols will get closer to that starry void than most non-astronauts—as high as 45,000 feet. As if that weren’t cool enough, this isn’t Nichols’ first rodeo. In 1977, she went up in the first iteration of NASA’s airborne observatory.

Nicholas Valentino, a NASA public-affairs officer, told the Daily Dot that SOFIA’s research “focuses on star formation, planets (we just captured Pluto occulting a star on June 29), astrochemistry, and how objects behave such as comets, supernovae, and the black hole at the center of our galaxy.”

Having Nichols along is far from an astronomical equivalent of having a C-list TV actor show up to your restaurant opening.

“Nichelle Nichols played a huge role in recruiting women and minorities into NASA, the astronaut corps, and in science, technology, engineering, and math careers, “said Valentino. “I have heard that she was directly responsible for recruiting a number of well-known astronauts including NASA Administrator Charles Bolden—of all people.”

Bolden is the first African American to serve as NASA administrator on a permanent basis.

Nichols’ SOFIA flight won’t just be 10 hours in the air. It will require a three-day preparation routine. Given her recent stroke, Nichols’ resilience in undergoing this preparation is estimable.

“We have a long list of safety requirements—crew rest, post-flight activity, sleep requirements, etc.,” Valentino said. Nichols will also be required to take a two-hour emergency egress training, an orientation about the responsibilities of each crewmember, and an astrophysics briefing before the flight.

Nichols confirmed she will be taking off from the NASA Armstrong Flight Research Center near Palmdale, California.

Nichols’ role will be educational. She’ll be fielding questions via social media during the flight. To ask her questions and read her answers, you can go to Starpower, the social media network she cofounded that focuses on celebrities using their fame to help important causes.