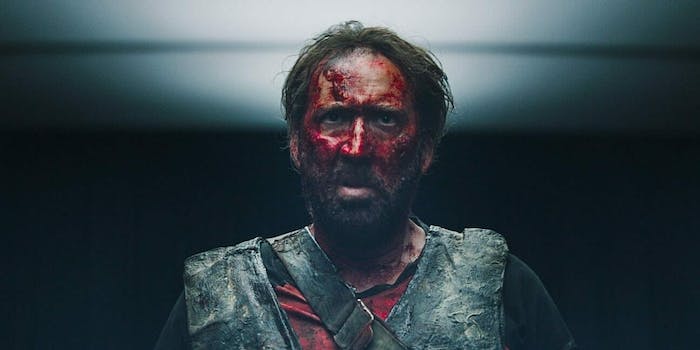 It's his best role in years.

Nic Cage makes like five movies each year, and most of them are—how do we put this?—not so good. But every once in a while he releases a doozy, and this year it’s the horror movie Mandy. This low-budget indie earned a lot of hype on the festival circuit, and its first trailer looks, in a word, bonkers.

This is Cage at his absolute Cagiest. Set in a secluded mountain location in the 1980s, its title image is Cage’s screaming, blood-drenched face. It’s directed by Italian filmmaker Panos Cosmatos, who made the deeply weird cult sci-fi/horror movie Beyond the Black Rainbow.

The titular Mandy (Andrea Riseborough) is Nic Cage’s girlfriend, who gets kidnapped by some kind of cult. The new trailer is balls-to-the-wall intense from start to finish, featuring retro neon lighting, supernatural imagery, bizarre monster costumes, and Nic Cage toting a giant ax. It’s averaging a cool 97 percent on Rotten Tomatoes, although we predict Mandy is an acquired taste for fans of extreme horror rather than mainstream audiences.

Out on Sept. 14, Mandy is reportedly Nic Cage’s best movie in years.