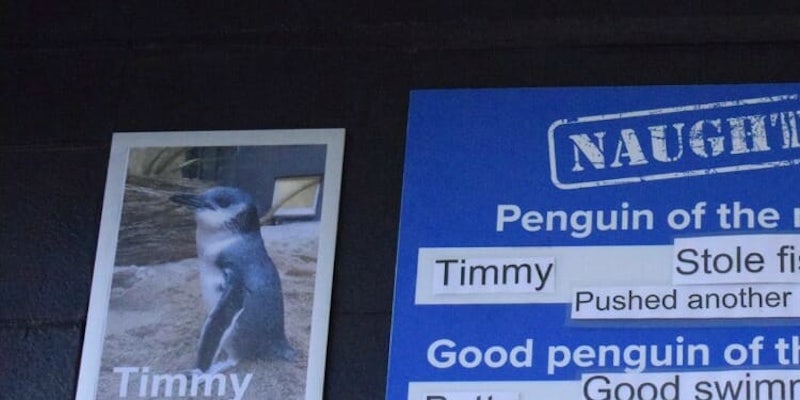 New Zealand aquarium adorably shames penguin for being too naughty

To be fair, Timmy DOES seem naughty.

Timmy, the penguin who lives at the National Aquarium of New Zealand, is a real jerk. He tries to steal food from his flightless friends. He’s too rough and inconsiderate of his fellow penguins. He flicks up sand to annoy anyone in his vicinity. And in case you needed any more proof that Timmy is a selfish SOB, the National Aquarium itself says so in this naughty-and-nice list.

Every month our penguin keepers tell the world about our naughtiest and best behaved penguins! This was the list for June….

Posted by National Aquarium of New Zealand on Saturday, July 1, 2017

Timmy, it turns out, could learn plenty from Betty, who apparently excels at swimming and waiting her turn at meal time. We don’t know how well Timmy swims, but we do have proof that he’s kind of an asshole when it comes to lunchtime.

Here is Timmy in action! Trying his best to steal from Draco

Posted by National Aquarium of New Zealand on Wednesday, July 5, 2017

Poor Draco, having to deal with Timmy’s selfishness.

But despite his penchant for pilfering from other penguins, the National Aquarium can’t help but love the little bastard, especially when you know his backstory.

Wrote the National Aquarium on Facebook: “Let’s talk about Timmy, our naughty penguin of the month. We love Timmy, however he’s a regular offender of stealing fish and pushing other penguins out the way while flicking up sand in the process! Timmy was found injured on a beach in Hawke’s Bay unable to walk. But with treatment and visits from his own chiropractor he is able to walk again, although a bit wobbly at times. He loves to swim and you can see him in action during feeding time every day at 9.30am, 1.30pm and 3.30pm.”

So, if you live in New Zealand or are visiting soon, head to the aquarium to say hey to Timmy. Just don’t bring fish for lunch, because Timmy is going to try like hell to steal it from you.