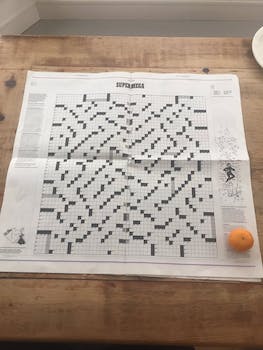 The New York Times has unleashed its largest crossword puzzle ever

Better put on your thinking cap.

The New York Times is unleashing a special puzzles section that will be delivered in New York on Saturday and nationally on Sunday. And it includes the biggest crossword puzzle ever created by the vaunted newspaper.

Here’s how gargantuan the brain-bending puzzle is for those who want to play.

Largest crossword in history of NYT, now loose in the wild (shown with clementine for scale). pic.twitter.com/h6TuIjilIc

The special section, though, isn’t only about crossword puzzles. Puzzle Madness also will feature Sudoku, word games, and other visual puzzles. So, if you love everything that makes your brain hurt, you’ll love the Times on Sunday.

But not everything is perfect for your lazy Sunday morning. There is some not-so-great news accompanying Puzzle Madness.

It's print-only. No digital version