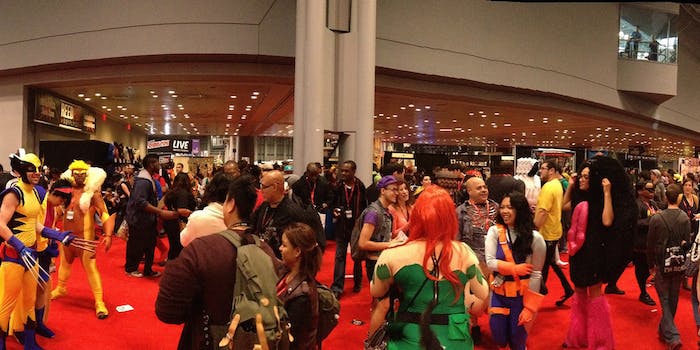 With the help of The Mary Sue, New York Comic Con is aiming for better safety.

Harassment happens at comic conventions every year, and that unfortunate fact has made it vitally important for event coordinators to make attendees feel safe. Having a clear and visible anti-harassment policy is a key part of this, but it’s also something that many conventions find difficult to do.

Even big conventions like San Diego Comic-Con have been called out for weak or unclear policies, and it’s a conversation that continues well past the busy summer convention season.

That’s why it’s refreshing to see a convention team get proactive on the topic. New York Comic Con (NYCC) has released an updated anti-harassment policy it put together with a little outside help.

Earlier this year ReedPOP, the organizers behind New York Comic Con and a number of other conventions, contacted geek culture website The Mary Sue for help with its policy. The site took things further by reaching out for additional help and formed a panel of seven people to help them advise NYCC.

The resulting policy is one that, according to The Mary Sue, “will be in use at all future ReedPOP conventions.” It prominently states that “cosplay is not consent” and does an impressive job of outlining the behavior that will not be tolerated while leaving it open to address other forms of harassment not specifically mentioned. This is in contrast to conventions that prefer to leave their policies vague and broad, out of in fear that being specific implies they’ll allow those types of harassment not mentioned in the policy.

NYCC’s new policy also clearly states what actions convention staff will take if harassment is reported and what attendees should do if they feel harassed or unsafe.

Another interesting addition to the policy is the ability for people to report harassment via the NYCC App. All you have to do is download the app and hit the Anti-Harassment Policy icon. At the moment all you can see is the policy itself, but according to NYCC there will be a Report Harassment option under which you can “fill out the form in as much detail as possible so we can address the situation immediately and thoroughly. If you’re still in the area where the incident took place and it’s safe to stay where you are, our Security Team will meet you there.” 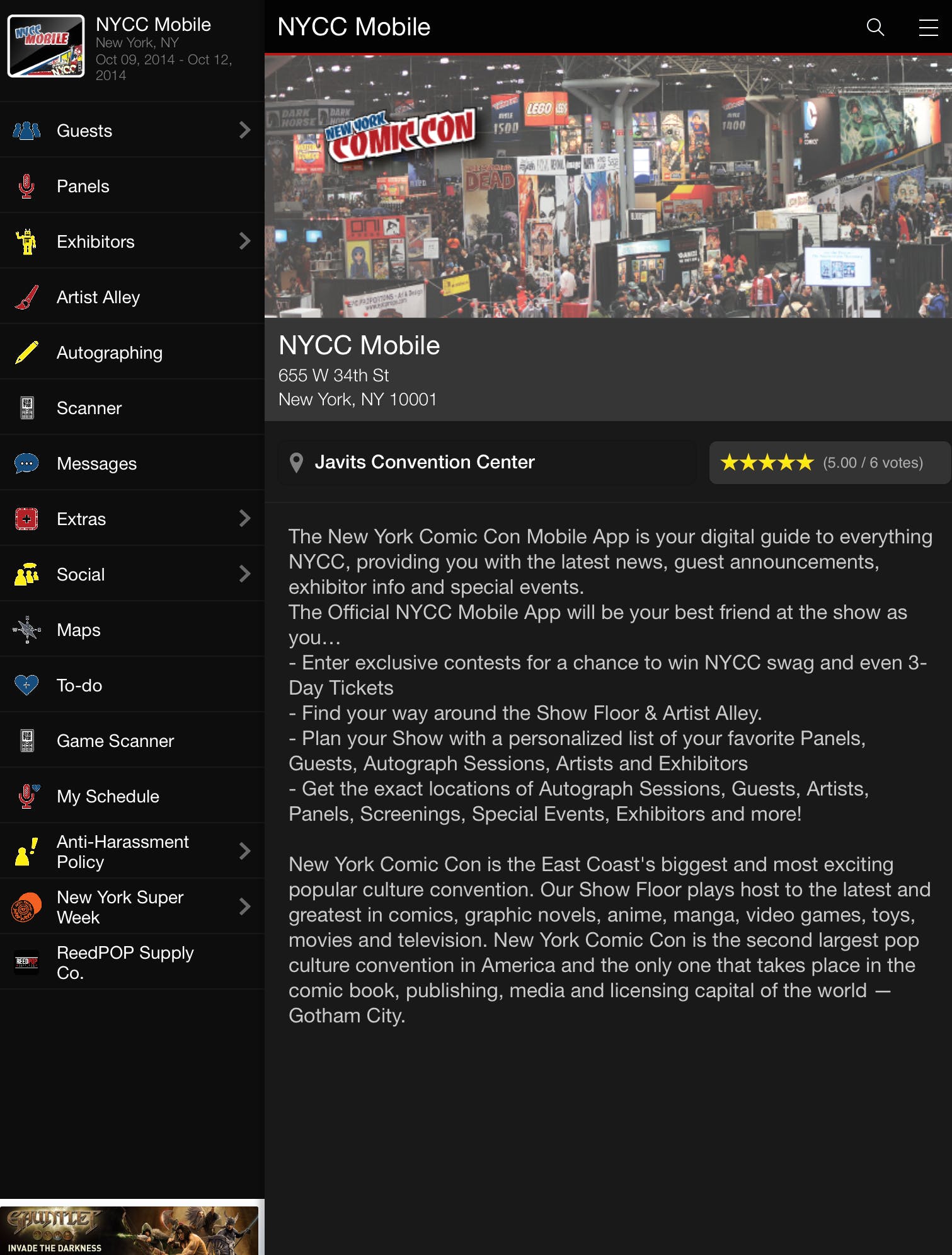 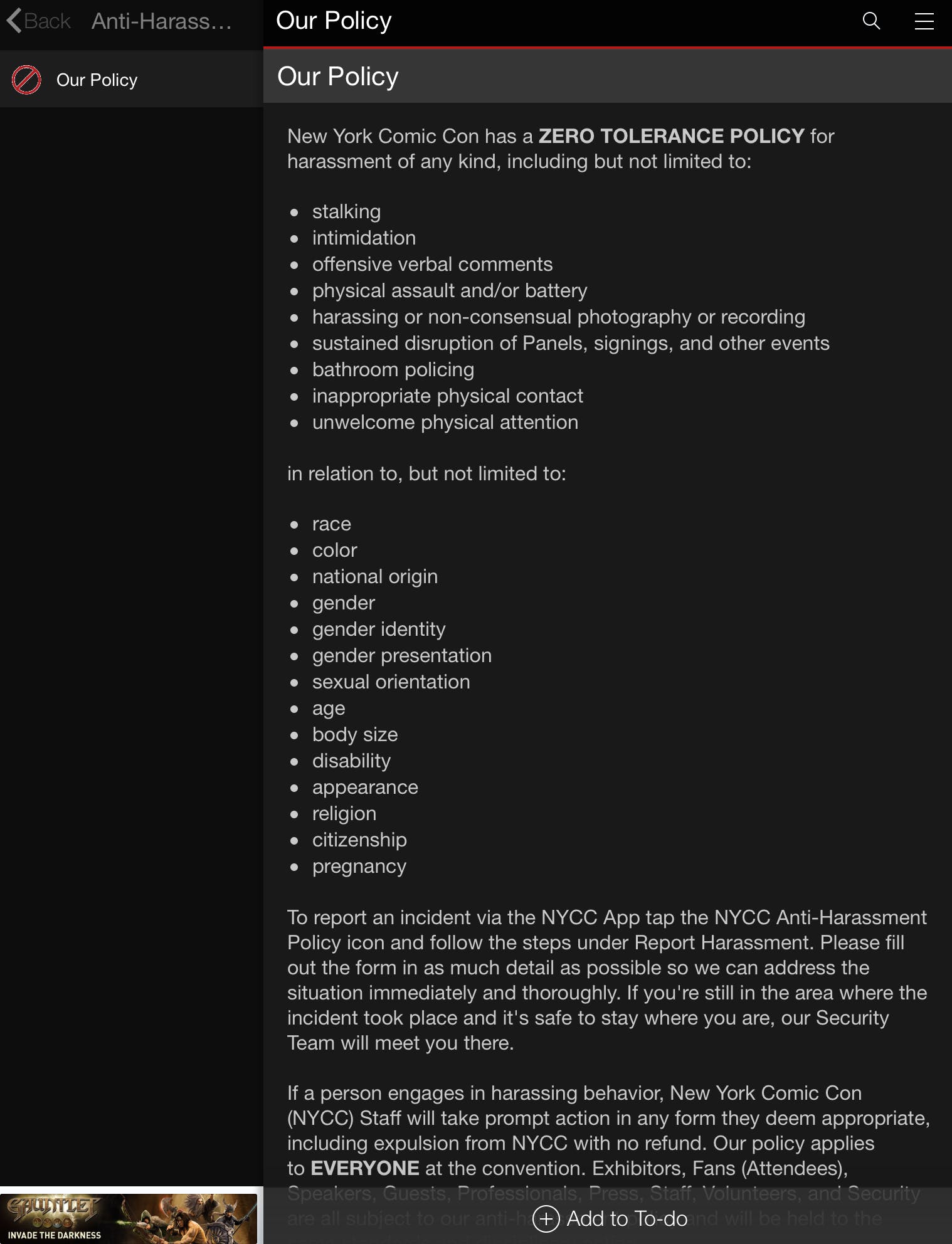 Screenshots by Lisa Granshaw via NYCC App for iPad

Hopefully the con and attendees will see improvements this year. NYCC is certainly no stranger to harassment problems, and there have been a number of incidents at the con over the years. This improved policy could help bring it one step closer to making anyone who goes feel safe while they’re having fun.