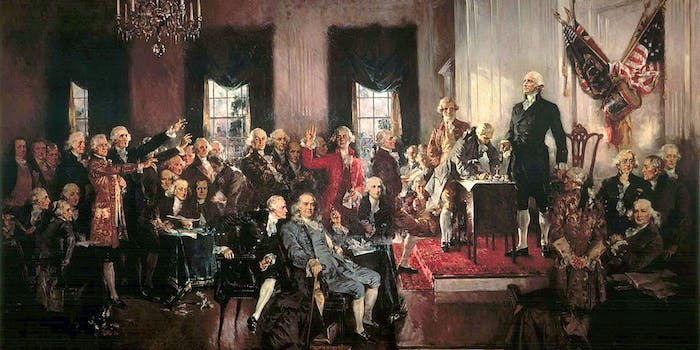 One Tumblr is asking men to take the pledge not to be on male-only convention panels. But what does that really mean?

After last month’s Book Expo scandal over a guest list of mostly white entertainers and an all male-only panel on Young Adult publishing, influential author John Green quietly mentioned that he’d asked Penguin months ago not to put him on male-only panels.

The concept of diversifying panels across geek media—in speculative and Young Adult publishing, gaming, comics, and other geek spaces—has been bandied about for a while. But talking and doing are two different things. At a 2012 Dragon Con panel I attended that was ironically about diversity in comics, the panel spent a good portion of the time apologizing for itself, as it was made up of white men who’d added, at the last minute, one woman who seemed unclear about why she’d been added to the panel. And while many conventions, like Geek Girl Con, state a preference for panels that are diverse, actually getting diverse expertise is difficult, to judge by the number of male-only panels that still exist.

Enter popular gaming journalist Leigh Alexander. Prompted by a piece analyzing the current state of indie gaming, Alexander began a discussion about the need to put talk into action when it came to diversifying the industry:

I do see ‘more diversity’ at events. But I want to feel ppl are invited to be listened to, not to have their presence make others feel good

There are many male writers now being lauded for their progressive words, but many of those men have never encouraged women writers, devs

Alexander’s tweets prompted participation in the discussion from comics artist Elizabeth Simins, who spoke up about the need to diversify convention panels.

Simins, in conjunction with Anthony Burch, decided to create a new Tumblr, No More Men-Only Panels, to ask men to pledge not to be on any more male-only panels. The panel description makes clear that the focus of the Tumblr is specifically to promote gender diversity only:

[F]eel free to add other underrepresented groups to your call for diversity — the world needs more panels from people other than straight, white, cisgender, able bodied dudes.

There are many kinds of diversity. No More Men-Only Panels Plz seeks to focus on gender diversity, but not at the expense of other forms of intersectionality. We hope that specifically requesting more female voices doesn’t preclude list members or would-be list members from requesting other kinds of voices that have nothing to do with gender.

Also, since you won’t be a guest on any panel or podcast without women involved, feel free to explain what you will be doing instead of appearing on that panel.

It also purports to be focused only on male-only panels in the gaming industry, though it’s readily apparent that the entire geek community desperately needs this kind of public call-to-arms from men across male-dominated geek spaces.

On Twitter, Simins emphasized that although the Tumblr wasn’t meant to promote gender diversity “at the expense” of other marginalized identities, she also felt that the need to emphasize gender diversity trumped other intersectionality concerns:

Addressing the gender disparity in games should not and does not take away from other intersectional causes.

We should be allowed to talk about gender disparity as a primary cause of one movement without threatening other equally important causes.

We will address other intersectional diversity but #plzdiversifyyourpanel is not pretending to be other than first & foremost about sexism.

Others pointed out that it seemed problematic for Simins, who is white, to dictate that the Tumblr should first and foremost be about promoting gender diversity—which too often can simply lead to more all-white panels:

In an extended conversation with game developer Rami Ismail, Simins insisted she was “confused” about how calling for gender-only diversified panels was exclusionary. Ismail responded extensively, pointing out that limiting “diversity” to just be about gender wasn’t really all that diverse:

Wow, I’m actually having a really negative reaction to the plzdiversifyyourpanel Tumblr for limiting ‘diversify’ to gender.

I’m all for what it’s doing, but I wish it was presented in a way that was actually inclusive of all other aspects of diversity.

Or at least like, fucking acknowledge that. Now they might just as well use “<h1>ONLY GENDER CREATES DIVERSITY</h1>” as their header.

Oh, and then they can add “<h2>And fuck non-Western/non-rich/emerging places and their problems, too</h2>”, because that’s what it’s saying.

Note: this is not to say that you cannot start something specifically aimed at dealing with sexism. That’s great.

I’m saying that it’s good to call out people that use ‘diversity’ as a term for one type of diversity, foregoing other forms of diversity.

It’s easy to understand Ismail’s concerns. After all, the Tumblr comes less than a month after a study revealed that the current crop of playable game protagonists consists almost solely of white people.

But for her part, Simins found it troubling that other participants in the discussion were upset:

@ElizSimins @tha_rami @reverendanthony Perhaps the ultimatum-nature of the branding “won’t talk on a panel w/o women” but as Rami says..

On Twitter, she issued a take-it-or-leave-it stance regarding men who had issues with the Tumblr:

If you have an issue with a movement that is first and foremost about fighting sexism, feel free not to sign #plzdiversifyyourpanel

So far, most people seem to feel that the Tumblr is a good idea, despite the lack of emphasis on diversity beyond combating sexism. A number of male gamers have joined the list, including acclaimed designer Oscar Barda and Davey Wreden, co-creator of the recent independent gaming hit, The Stanley Parable.

#plzdiversifyyourpanel is a really good, EASY way to make nerd spaces better. You asked, men of #1reasonwhy & #YesAllWomen, here it is.

Though the Tumblr is currently geared almost solely towards gaming, it seems to have the potential for branching out—unless it becomes just one more example of the many ways in which geek culture remains predominantly a space for white people to make other white people feel comfortable.

Update:  Responding to a request for comment via email, Simins elaborated on her belief that a push for gender diversity doesn’t conflict with the need for other kinds of diversity:

Though plzdiversifyyourpanel.tumblr.com encourages intersectionality, as we have stated in the top post since day 1, it is first and foremost about fighting sexism. Fighting sexism in particular should not threaten other equally important causes in general. It shouldn’t be a problem to have an initiative specifically dedicated to increasing the presence of women, non-binary, and genderqueer people on panels and podcasts. Frankly, though much of the criticism of #plzdiversifyyourpanel has been legitimate and helpful (particularly the criticism having to do with language and phraseology), some of it has felt more like men being uncomfortable with a space that puts the problem of sexism front and center.

There are myriad diversity-related (and other) problems in the gaming space. Sexism is only one of them. Though the #plzdiversifyyourpanel initiative was never supposed to be “mine,” and ideally will eventually be totally in the hands of the men who sign on, I feel that it is important to work specifically on the sexism problem—never at the exclusion of other problems or intersectionalities, but yes, on sexism first and foremost. Not because it’s “more important” or a “worse problem,” but because it’s a small step I feel comfortable working to take based on my experiences being a woman in games, and a step I think is necessary.

My fear is that if #plzdiversifyyourpanel becomes about every single oppressed group/intersection in particular, we will end up with a—

—group of people who are committed to extremely diverse panels, of men only. And that’s on me because my personal experience has shown me—

—how ingrained sexism is in the games community. I guess it’s up to people to prove me wrong.