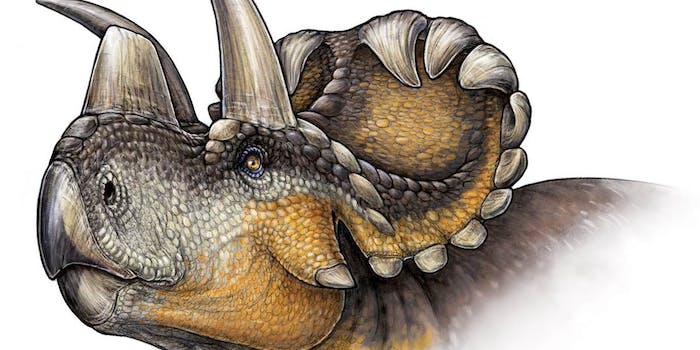 Danielle Dufault/PLOS ONE (CC BY 4.0)

It’s cute as a button.

You don’t need to catch glimpses of the baby Triceratops petting zoo in Jurassic World to get your dose of Cretaceous cuteness. Paleontologists named a new species of the three-horned dinosaur today in the open-access online journal, PLOS ONE.

The new ceratopsid (the name of a member of the family the Triceratops we know and love hails from) is called Wendiceratops pinhornensis or “Wendi” for short. She has a stumpy horn on her nose and curly frills on the back of her head that just make you want to gobble her up.

But Wendi is more than just a cute face. She’s helping paleontologists piece together just how the Triceratops’ horns evolved. Ceratopsids developed their characteristic horns relatively quickly. Most new species can only be distinguished by their heads—their bodies are pretty much the same from the neck down.

“Between having nothing and having a very large horn—Wendi falls in the middle,” Michael Ryan, the study’s co-author told the Washington Post. He noted that Wendi also falls right in the middle of the tree of life for the group, so her intermediate horn size makes a lot of sense from an evolutionary perspective.

Ryan also speculated to the Washington Post that the horns evolved rapidly due to sexual selection—female ceratopsids likely found the horns appealing, so the males who had the more impressive horns and frills were more likely to get a date than those with less impressive horns. They may have also used their horns similar to the way goats do today—butting heads with each other in displays of strength and stamina to impress the ladies.

It’s turning out to be a banner year for the three-horned, frilled dinos. This discovery comes only a month after researchers discovered a related species of dinosaur that they nicknamed “Hellboy.”

Image via Danielle Dufault/PLOS ONE (CC BY 4.0)