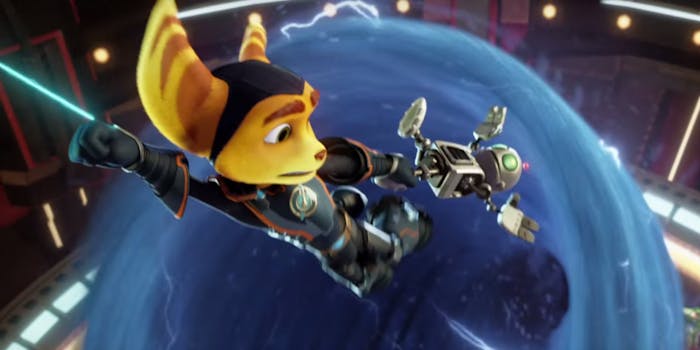 Here’s your first look at the ‘Ratchet & Clank’ animated movie

The famous platforming duo are coming to the big screen.

You played with some of the most creative and loopy guns in video games when you enjoyed the Ratchet & Clank series. Now it’s time to see how the adventure translates onto the silver screen.

Developed by Insomniac Games, the studio that also developed the Resistance series of first-person shooters, the Ratchet & Clank series is defined by a cartoony science-fiction universe and a slew of unique, innovative weapons.

The Ratchet & Clank series began in 2002 on the PlayStation 2, and has been a mainstay franchise on PlayStation consoles ever since, with a dozen games released between the PS2, PS3, and Playstation Portable handheld.

The games are legitimate platformers in terms of level of challenge, but the stories in Ratchet & Clank games never took themselves very seriously. That playful spirit and cartoony design could lead to a film adaptation that defies the traditional bad reputation of video game movies.

Having a cast that includes Paul Giamatti, John Goodman, Rosario Dawson, and Sylvester Stallone doesn’t hurt its chances, either.

The Ratchet & Clank movie will hit theaters in April 2016.