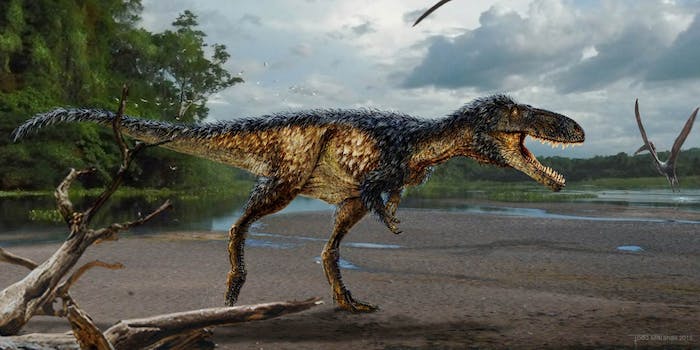 This horse-sized dinosaur may help explain how T. rex got so big

Researchers aren’t sure how they got so big.

A newly discovered dinosaur hailing from what is now Uzbekistan may hold the secrets of the evolution of Tyrannosaurs rex.

The dinosaur, called Timurlengia euotica, was about the size of a horse and likely weighed 375-600 pounds, the authors reported in a study published in the Proceedings of the National Academy of Sciences. Paleontologists weren’t sure how T. rex got so large due to a gap in the fossil record. But Timurlengia, estimated to have lived about 90 million years ago, represents a middle ground—a link—between the massive, many-ton T. rex and its deer-sized ancestors from the mid-Cretaceous period, Gizmodo reported.

The researchers think that the dinosaur likely had a highly developed brain and an extremely keen sense of hearing—traits it shared in common with T. rex.

This is interesting to researchers because they aren’t sure what the evolutionary pressure was that allowed the king of the dinosaurs to grow so large. In their paper, the researchers suggest that Timurlengia supports a “head first” model, where T. rex and its related cousins and ancestors evolved highly specialized brains and senses—and a large brain case to support them—before growing large in body size. Then, when the environmental conditions were right, they were able to become bigger in body size thanks to their refined sensory abilities.

“The ancestors of T. rex would have looked a whole lot like Timurlengia, a horse-sized hunter with a big brain and keen hearing that would put us to shame,” lead author Steve Brusatte said in a press release. “Only after these ancestral tyrannosaurs evolved their clever brains and sharp senses did they grow into the colossal sizes of T. rex. Tyrannosaurs had to get smart before they got big.”

But that’s just a hypothesis, supported by a single species, and more studies are needed to confirm it.